There are worse things for dogs than chewing tennis balls November 11, 2016 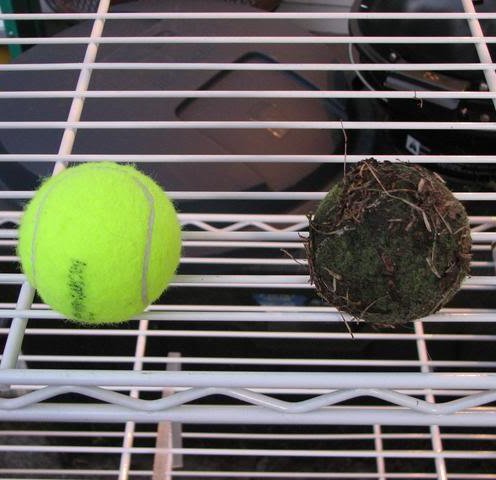 Yikes. How will Labs and golden retrievers ever have another moment of joy? What could possibly replace those delectably soggy, filthy orbs of happiness? And should owners begin the weaning process immediately?

Not to spread alarm if you haven't already plugged into this latest pet-owner panic-inciter, but concern has been expressed far and wide in recent months about the dangers of tennis ball chewing. The fuzzy texture of the ball, it is said, gradually wears down the tooth, causing all manner of problems. There are even tennis ball alternatives being rolled out to protect the canines of canines.

Rumors and urban myth spread at least as fast as utter truth in this tech age. No one ever seems to know where any of the information originated, but it gets passed on, computer to computer, mouth to ear. When this latest worry reached me at the end of the year, I resolved to see if I could confirm (or disconfirm) the veracity of the Great Tennis Ball Fuss.

So here it is. Tennis balls do indeed wear down teeth. But usually not to a concerning level. So unless you have a 24/7 tennis ball chewer, don't worry about it.

Who says? Tony Woodward, one of 104 board-certified veterinary dentists in the world. He knows teeth. It's what he does. He became a vet, then spent nearly six more years of intense study to become a tooth specialist. His practice is in Colorado Springs.

Simply by looking in their mouths, he can identify dogs that love to gnaw on, carry around, lick and otherwise orally engage with tennis balls. The texture of a tennis ball is little abrasive, he says, and it gets much more so as it picks up dirt and grit over time. And if the dog is an "oral compulsive" — Labs, goldens and border collies often qualify — the fangs can begin to wear a little and eventually get blunted.

The progression of fang wear slows with time because the wear is no longer occurring at the sharp point, but along a wider surface as the point disappears, he says.

Rarely does this kind of blunting cause any problem, even among dogs that live many years and chew pretty regularly on tennis balls, he says. Maybe one in 200 dogs with tennis ball blunting have a problem that requires some dental attention, and those tend to be the dogs that are "obsessive fanatics" that chew practically non-stop, he says. You know if you have one of those dogs. And if you do, you should probably try to shift it to chewing on something else for at least part of the time, something pliable, something...

@adamrutherford @bbctms Lovely story about lost tennis balls in the back garden just now by youngster trying to imitate him… Sun, 24 May 2015 04:18 PM