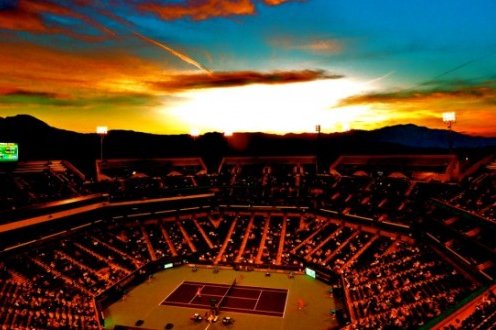 World No. 1 Serena Williams walked on the court on Friday at Indian Wells and started crying, and it didn’t get any easier from there.

Receiving a rousing ovation from the crowd upon her arrival on the court after a 14-year absence, Serena suffered mightily through a 7-5, 7-5 win over No. 68-ranked Monica Niculescu, whose unorthodox style combined with the occasion had Serena beside herself.

“I just felt everything and it just felt so good I was overwhelmed and it was a great feeling, ” she said. “It was an emotional time. The crowd was just so amazing and so nice.”

There were three seeded upsets as American Sloane Stephens ousted No. 13 Angelique Kerber, Russian Anastasia Pavlyuchenkova beat No. 17 Barbora Zahlavova Strycova, and Brit Heather Watson topped No. 29 Camila “My Dad Will Pay you Later” Giorgi, all in straight sets.

Other seeded winners Friday were No. 3 Simona Halep coming from a set down to defeat Russian Daria Gavrilova, No. 7 Agnieszka Radwanska, No. 8 Ekaterina Makarova, No. 10 Lucie Safarova, No. 12 Carla Suarez Navarro, No. 14 Karolina Pliskova, No. 19 Garbine Muguruza, No. 22 Svetlana Kuznetsova, No. 23 Elina Svitolina who came from a set down to beat Belgian Alison Van Uytvanck, No. 26 Varvara Lepchenko, No. 27 Timea Bacsinszky likewise over new Zealand’s Marina Erakovic, and No. 28 Zarina Diyas who will next meet the No. 1 Williams.

It was all-unseeded, all-ugly action on the men’s side, with the few standouts including Sam “Millionaire Match Made” Querrey blowing a huge lead against Segiy Stakhovsky, falling 2-6, 6-4, 6-2; the diminutive Diego Schwartzman ousting big man Jerzy Janowicz in a third-set breaker; and homecountry players Jack Sock, Steve Johnson and Donald Young advancing.