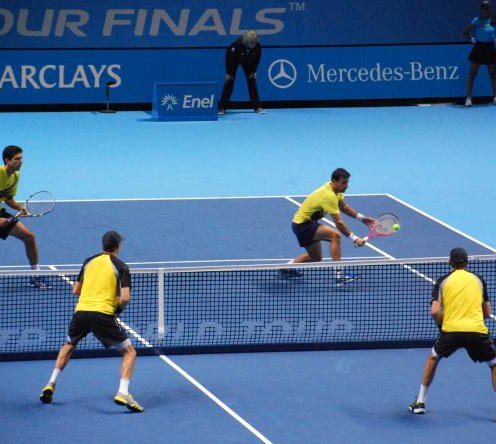 In singles, great skill generally is worth more than great strategy and smarts. In doubles, it's the other way around. Which is why good training of your doubles players can make a real difference in the team's overall success.

1. Training them to proper eyework at net. No head turning to watch their partner hit the ball. Just learning where they should be looking as the ball goes back and forth raises the level of their game, as they start winning truckloads of points they used to lose.

2. Training them to proper footwork at net. Most players just park, never moving unless a shot comes to them. Teach your players to widen their partner's hitting lane and to narrow the opposing baseliner's hitting lane. That alone is a big help, but your players then see that doubles is a game of maneuvering and positioning, and they now notice and discover the finer points of it on their own.

3. Way too many players need to be taught not to run backwards when they are at net and an opposing net player is about to wham the ball. They need it drilled into their heads that while they are backpedaling, they are incapacitated, that they must STEP back and SET themselves for the shot. Or, if they feel endangered, the way out of harm's way is to the SIDE, not back. That is, they must be taught the Move - a pivot turning your back to the net with a step toward your alley.

4. Many high school players always volley crosscourt. You can't do that in doubles. When the opposing team is in the Up-and-Back Formation, be death on you volleyers hitting through the angular Hole between them. Even when they must angle the volley the other way. It isn't that hard to learn. It just takes a little practice. If they have to choke up on the racket a bit to do that, fine. Whatever it takes. If they know you won't take "But I can't" as an answer, they will learn in a day or two.

5. Switching for lobs over your net player is generally thought to be a good idea, the thing to do. The Switch Trick is the first bit of true strategy I teach young players. They need to know the perils of switching and that it usually isn't necessary. They need to know how to switch safely when it is necessary. And, once they know the Switch Trick, they can play it on most opponents all day long.

RT @johnvarlas: Congrats to Carmen Saab and Mary Jane McCaghren of St. Mary's! They end their terrific high school careers with a second do… Fri, 22 May 2015 09:54 PM