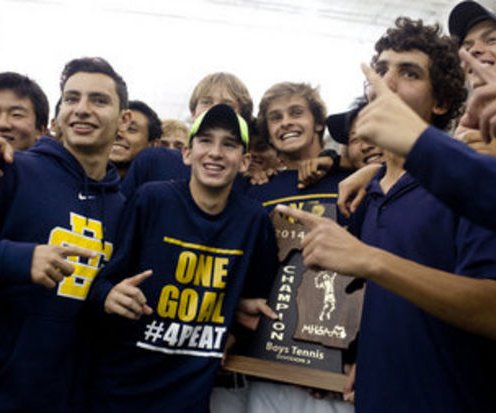 “I admire and respect the countless number of hours and complete selflessness Coach Nykerk provides our student-athletes, our tennis program, and Central High School, ” said Mark Mattson, Central High School athletic director. “Larry’s experience after 40 years of coaching is a huge asset to our program and we are fortunate that we won’t lose him entirely. Coach Nykerk will kick-off his 34th year of Trojan girls’ tennis in the spring.”

Nykerk has been instrumental in developing and growing the Trojan tennis program and is the all-time winningest tennis coach in Michigan, with over 1000 career wins. He has also been named Michigan Tennis Coach of the Year three times and Regional Coach of the Year 28 times, 13 of those being with the boys’ tennis program. In 2011, he was a finalist for National Coach of the Year. Under his leadership, Trojan tennis has maintained a high level of performance, winning conferences, posting undefeated seasons, winning Regionals, and placed in the top 5 to 10 in the state.

Some of his other accomplishments include 40 years in the top 10 state ranking with the boys’ tennis program, tournament title champs with 354, 152 in boys alone, 658 dual meet wins, 390 of them with the boys. Nykerk has coached four boys’ tennis State Champions, eight State Finalists, 18 Century Club players (100 wins), and 48 All State award winners. He has also been the Director of the Grand Traverse Tennis Camp for 38 years and has been instrumental as the Director of the Friends of TC Tennis, which helped to fundraise and rebuild the tennis courts at Central High School.

“I have been blessed to be able to share my passion for tennis with so many great kids from so many wonderful families in Traverse City, ” said Nykerk. ““Black and Gold” runs in my veins and I am pleased to have built and sustained a top-notch tennis program for TC Central. I plan on continuing to coach the girls’ program, running the summer tennis camps, and help to support the boys’ program.”