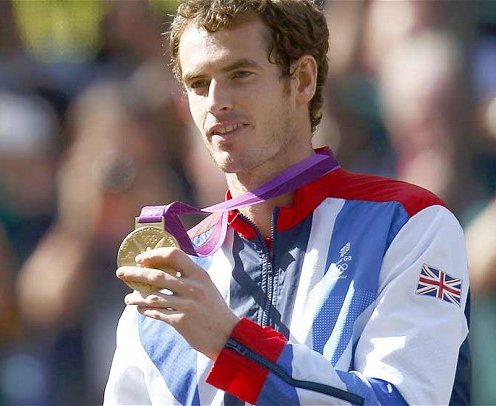 Murray is yet to win a grand slam title, the real hard currency for tennis players, but on Sunday he produced the match of his life, riding the wave of Olympic euphoria sweeping across the land to thrash the world number one 6-2 6-1 6-4.

"It's worth it. I've had a lot of tough losses in my career, but this is the best way to come back from the Wimbledon final. I'll never forget it, " Murray told reporters before returning to court partner teenager Laura Robson in the mixed doubles final.

Unlike the old saying about London's buses - you wait for ages, then two come along one after the other - another gold was not forthcoming as they were beaten in a lively tussle with Belarussians Max Mirnyi and Victoria Azarenka

A statue of Fred Perry, the last British man to win the actual Wimbledon men's singles title back in sepia-tinted 1936, stands in the grounds - a reminder of the nation's tennis under-achievement throughout the decades, but for two golden hours on Sunday Murray wiped away the years of hurt.

Seven-times Wimbledon champion Federer, in most people's book the greatest player of all time, walked on to his favourite court one victory away from claiming a career "golden slam" by adding Olympic singles gold to his record 17 grand slam titles.

He trudged off dejected after suffering his worst ever defeat at Wimbledon since his sublime talent first graced the lawns of west London in 1999.

"For me, it's been a great month. I won Wimbledon, became world number one again, and I got silver. Don't feel too bad for me, " was 30-year-old Federer's classy response to what in all intents and purposes was a shellacking.

Murray, whose every winner was accompanied by deafening roars, was utterly dominant, dishing out the kind of punishment that Federer has been inflicting on opponents throughout a career that has earned him $77 million in prize money but will probably not now include a cherished Olympic singles medal.

From 2-2 in the first set, Murray went on a nine-game rampage to rip the gold medal away from Federer's grasp.