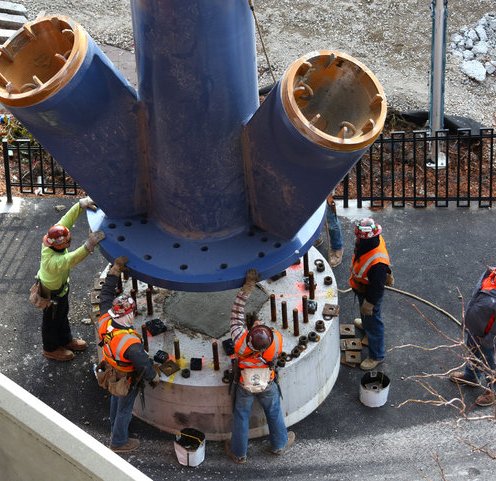 The strategic vision - a series of interconnected construction projects that include building developments, infrastructure upgrades and improvements to site circulation - aims to enhance the current conditions at the NTC and preserve its stature as a world-class venue. The project will positively impact the facility’s ability to host its flagship event, the US Open, while simultaneously providing a superior experience for both visiting fans and players, allowing the City of New York to continue to reap substantial economic benefits.

“The US Open is one of the city’s greatest sporting events, and it generates more than $750 million a year in economic activity, ” said Mayor Bloomberg. “The city recognizes the crucial need to improve the USTA facility and supports this vision, so that the center remains a top-ranked tennis venue capable of hosting the US Open, and thereby allowing the tournament to remain in New York City for many decades.”

“Our goal remains to ensure that the USTA Billie Jean King National Tennis Center remains a world-class facility for the top professional tennis players, for the hundreds of thousands of fans who annually attend the US Open, and, as importantly, the near hundred thousand recreational tennis players who use this facility all year round, ” said Jon Vegosen, Chairman of the Board and President of the USTA. “The Strategic Vision will enable us to achieve this goal.”

The project, expected to develop throughout a multi-year period and cost hundreds of millions of dollars, will be undertaken by the USTA, which will investigate a multitude of potential financing options. The project will primarily entail the replacement and renovation of aging facilities and infrastructures. Since 1978, the USTA has invested more than $500 million of its own funds into the NTC, and this project will continue that investment.

Currently, the US Open is New York City’s largest and most valued annual public sporting event, and generates $756 million in economic impact. Attendance now regularly tops 700, 000, making the US Open the highest-attended annual sporting event in the world. On television and through various media, the US Open reaches a global audience, attracting 85 million TV viewers in the United States and is broadcast to 188 countries, with more than 41, 000 hours of coverage.