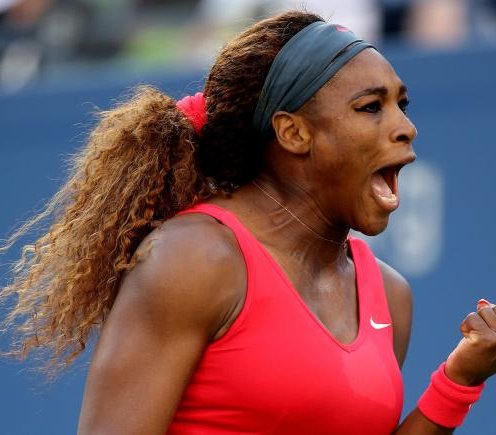 Second set: Williams 6 Wozniacki 3 Caroline has not let her head drop but she's been kicked from pillar to post here. Woz looks in serious trouble 0-15 down and being run ragged again, but she produces an excellent running backhand winner. Williams now wins a tremendous point, the rally of the match, 26 shots. Woz giving her all but Williams just there hammering away. She wins the next point as well, another long rally. 15-40 and in big trouble. Woz is overpowered once again, broken, and that is game, set and match Williams. She collapses onto the court, lies prone.

Second set: Williams 5 Wozniacki* 3 Williams is 30-0 up in a trice. But Wozzer plays a good point, coming into the net for, I think, the first time and forcing Williams to attempt a low percentage passing shot, which she misses. Now another really good point from Caroline, in control, moving Serena around and she's got it back to 30-30. This is the moment for Woz. Brutal body serve, she can do nothing with that. 40-30. Despite needing the second serve, Serena too strong, left a distant second to the power hitting of Serena. Game Williams. Woz serves to stay in the match.

Second set: Williams* 4 Wozniacki 3 Caroline sidles into the last chance saloon and drinks whatever it is that Danish tennis stars drink - something with elderflower and vodka, maybe. She wins this game with some aplomb.

Second set: Williams 4 Wozniacki* 2 Not even a hint of a sniff of a suggestion of a break point in this dominating service game from Williams.

Second set: Williams 3* Wozniacki 2 Wozzer holds serve, but Williams is just three games away from joining Martina Navratilova and Chris Evert on 18 grand slam singles titles. I have literally no idea how Caroline can stop that. Not entirely sure she does either. Just too good, too strong.

Second set: Williams 3 Wozniacki* 1 Serena has got it working now and, as so often in her career, if she hits about 85% of her best, that's good enough to beat the rest. Eases through this service game in thrumming, low, powerful gear.

Second set: Williams* 2 Wozniacki 1 Another long rally, Williams moving her opponent around at will. 30-30. Caroline wins the next point but then upsets her own rhythm by picking an argument with the umpire about the ball-girl and, I think, something that has blown onto the court. Sure enough, she now misses with her first serve and dishes the second serve up with parsley around it at 73mph. Bosh. That's deuce, Williams wins the next point with the shot of the match, a screaming backhand from a narrow angle. Caroline, thoug, holds on to win the game and she's on the board in the second.