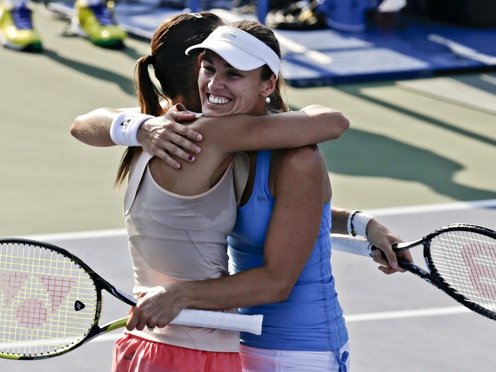 Bruno Soares captured his second US Open mixed doubles title on Friday at Flushing Meadows as he and Sania Mirza edged Santiago Gonzalez and Abigail Spears 6-1, 2-6, 11-9.

The top seeds squandered a 9-4 lead in the decisive Match Tie-break, but a volley long from Spears gave them a sixth match point chance and they converted as Spears sent another backhand volley long under pressure from Soares.

Two years ago, Soares won his first Grand Slam mixed doubles crown when he and Ekaterina Makarova defeated Marcin Matkowski and Kveta Peschke in the US Open final. He was also runner-up with Lisa Raymond at Wimbledon in 2013 (l. to Nestor/Mladenovic).

“I keep getting the right partners I guess!” said Soares during the trophy presentation. “Two years from now Sania is going to be in the semis in singles, I guess, like Makarova is this year. I love playing out here, playing in the States. New York is a great city and it’s a lot of fun to be here.”