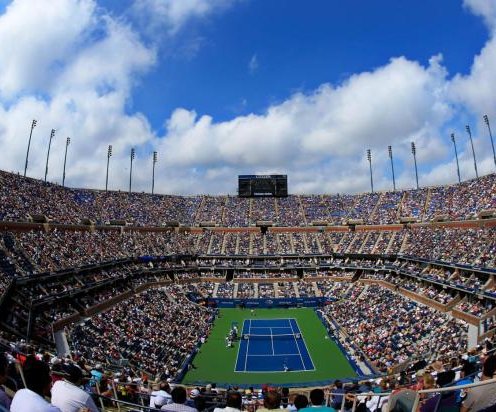 What it is: When a player has the opportunity to win either the best of three or five sets by winning this final point. They would then have won the match.

Tiebreaker
What it’s not: A final point used to determine the overall winner of a competition

What is it: In tennis, when a set gets to six games all (meaning both players have won six games), a tiebreaker is played in order to determine the winner, making the set seven to six, the only time in tennis where you don’t win by two. However, the tiebreaker itself must be won by two points. A tiebreaker is a game played to a minimum of seven points, where players switch off service. The first player serves one point, then the other serves two, and from then on the players switch off serving two consecutive points. Points are kept track of in plus-one increments, as opposed to 15, 30, 40 format. If the score becomes six serving seven, even though seven was reached, a player must win by two points, so another point is played. The player to win the tiebreak wins the set.

Deuce
What it’s not: Something your significant other says he needs to go do in the bathroom (gross!)

What it is: When the score in a game is 40 all. If deuce is reached in a tennis game, at least two more points will be played in order for a player to win by two. After deuce, the next player to win a point then has “advantage.” If that same player wins the following point, he or she win the game. However, if the player with advantage loses the following point, the score becomes deuce again. Deuce can be repeated infinitely in a tennis game.

Advantage In or Ad In
What it’s not: Offering your two cents to a conversation

What it is: When the player serving a tennis game wins the point following deuce. The score is then advantage in, ad in or sometimes will be announced as advantage and the player’s last name (i.e.; advantage Federer).

Advantage Out or Ad Out
What it’s not: When you are no longer winning an argument

What it is: When the player receiving service wins the point following deuce. The score is then advantage out, ad out or sometimes will be announced as advantage and the player’s last name (i.e., advantage Sharapova).

US Open Tennis 2014: Schedule and Bracket Predictions for ...