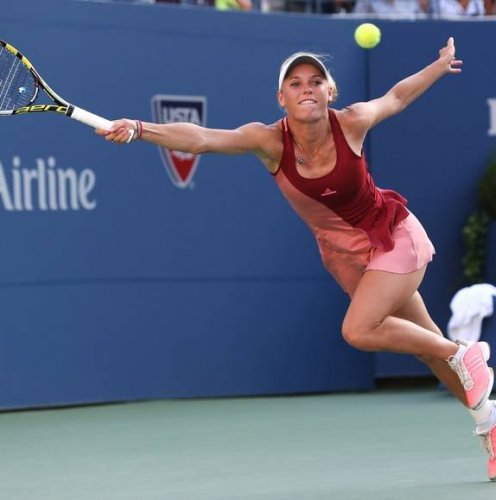 WHAT HAPPENED: No. 17 seed Ekaterina Makarova upset No. 7 seed and Wimbledon finalist Eugenie Bouchard 7-6, 6-4 in a drama filled US Open fourth round match in a swealtering Louis Armstrong Stadium on Monday. The 26-year-old Russian is into the US Open Elite Eight for the second consecutive year.

Bouchard, who also reached the Australian Open and French Open semifinals this season in breakout year for the 20-year-old Canadian was in visible distress late in the match from the heat and humidity and energy sapping intense baseline rallies. Trailing 2-3 in the second set Bouchard called for a medical timeout when her blood pressure was checked and the trainer soaked down her legs and arms with ice packs. Bouchard fought gamely on but Makarova stood strong crushing a forehand service return to finish the one hour and 44 minute battle.

The Canadian came out strong, holding serve at love, but she had difficulties in the windy Louis Armstrong Stadium, and the Russian won eight points in a row to take a 2-1 lead, then held the lead until it came time to serve things out, hitting an ill-timed double fault to allow the No. 7 seed to level the set. Makarova, the No. 17 seed, ultimately got back in a rythm, dominating the tiebreak and handing Bouchard her third straight loss in a tiebreak set at the US Open.

Makarova opened the second set by holding at love, but later had to fight off three break points against Bouchard, increasingly ailing in the high heat and humidity. The Canadian would have her blood pressure checked after the fifth game of the second set, takin a medical timeout while trailing 3-2. Trainers applied ice packs to her head and legs, tryng to cool down Bouchard.