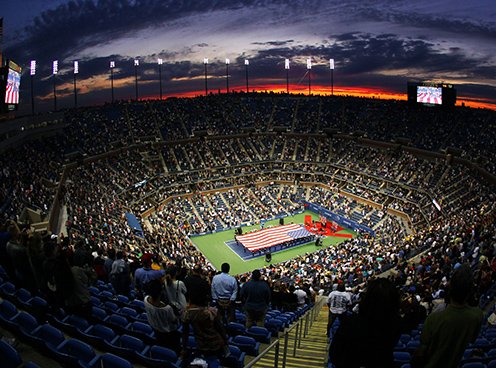 Hard to believe this is the guy sent packing in the first round of Wimbledon in June, losing against someone ranked 135th.

"This is probably the most emotional one in my career, " Nadal said. "I know I had to be almost perfect to win."

They started in sunlight and finished at night, a 3-hour, 21-minute miniseries of cliffhangers and plot twists and a pair of protagonists who inspired standing ovations in the middle of games.

"Probably nobody brings my game to the limit like Novak, " said Nadal, who collected $3.6 million in prize money, including a $1 million bonus for results during the North American hard-court circuit.

There was no quit in either of them, during points that lasted 15, 25, even more than 50 strokes. Those rallies went so long, rarely over when they appeared to be, and spectators often shouted out during the course of play, prompting Nadal to complain to the chair umpire.

This was their 37th match against each other, the most between any two men in the Open era, and Nadal has won 22. It also was their third head-to-head US Open final in the last four years. Nadal beat Djokovic for the 2010 title, and Djokovic won their rematch in 2011.

They know each other's games so well, and play such similar hustle-to-every-ball styles, but in the end, it was Nadal who was superior.

"He was too good. He definitely deserved to win this match today and this trophy, " Djokovic said. "Obviously disappointing to lose a match like this."

Nadal improved to 22-0 on hard courts and 60-3 overall in 2013 with 10 titles, including at the French Open, which made him the first man with at least one Grand Slam trophy in nine consecutive seasons. The 27-year-old Spaniard's total of 13 major championships ranks third in the history of men's tennis, behind only Roger Federer's 17 and Pete Sampras' 14.

Nadal has won a record eight titles at the French Open, two each at the US Open and Wimbledon, and one at the Australian Open.

"Thirteen Grand Slams for a guy who is 27 years old is incredible, " said Djokovic, who owns six himself. "Whatever he achieved so far in his career, everybody should respect, no question about it."

Nadal no longer wears the strips of white tape he once did to bolster his left knee, and the way he covered the court against Djokovic - switching from defense to offense in a blink - proved that while he says he still feels pain in that leg, he definitely does not have problems moving around.