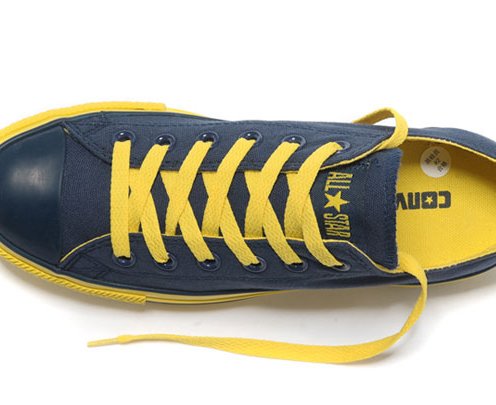 According to legend, in 1918, a high school basketball player laced up his first pair of Converse All-Stars; Converse's first basketball shoe, released only one year previous. At that point, basketball itself was only 27 years old, and the formation of the NBA was 28 years away. Being a professional basketball player involved barnstorming- joining a locally based traveling team and touring the country playing loosely-organized exhibition matches for small crowds. This high school player, 17 year-old Charles H. Taylor, would go on to a brief and largely unrecorded career as a barnstormer. Fifty years later, this early player and fan of both basketball and Converse All-Star sneakers would be inducted into the basketball hall of fame; not for his success as a player, but as a shoe salesman.

By the time Chuck Taylor joined Converse in 1921, the company was already an established footwear manufacturer, but still fairly new to the concept of athletic shoes. Founded in Malden, Massachusetts in 1908 by Marquis M. Converse, the Converse Rubber Shoe Company initially found success producing rubber-soled winter footwear, manufacturing up to 4, 000 pairs per day by 1910. They were designed to prevent slipping on an icy sidewalk, but were certainly no pop-culture icons. In 1915, the company added a tennis shoe to the product line, and two years later released the not-yet famous All-Star basketball shoe. It was this shoe, of course, which Chuck Taylor (according to legend, anyway) improved in 1921 by suggesting a more flexible outsole and the shoe's signature supportive ankle patch. After he'd spent two years touring the country promoting the newly improved All-Star and the still-fledgling sport of basketball, Converse added Chuck's actual signature to the shoe's patch. Now, what is arguably the most famous athletic shoe ever was complete and ready to barnstorm its way into basketball legend and American history.

In the following decades, the All-Star became the ultimate hoops shoe, appearing on basketball courts everywhere. Its evolution saw it modified in team-specific color variations and worn by legendary NBA players like Julius 'Dr. J' Erving (who was given his own line of shoes in 1976) and Wilt 'The Stilt' Chamberlain (who famously set the single game scoring record in 1962 by racking up 100 points with a pair of Converse on his size 15 feet).

One of the first teams to adopt the All-Star was the also the first all-black barnstorming team; the now-legendary New York Renaissance. Converse developed custom All-Stars for the Rens in 1923, and the team went on to more than 2, 500 wins and a World Basketball Tournament championship, despite a demanding touring schedule and racial discrimination preventing them from joining any professional league. Another set of history makers, the All-American Red Heads (one of the first female basketball teams) got customized All-Stars in 1936. These days, fully-integrated basketball teams and the Women's NBA are taken for granted, but back then, there were just a few brave and talented pioneers with All-Stars on their feet.

How to Checkerboard Lace Chuck Taylors