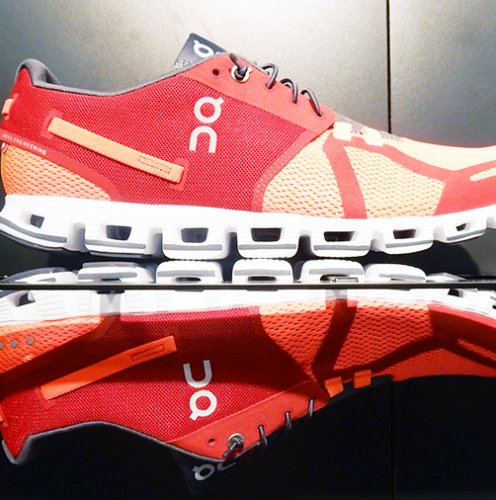 So-called tennis shoes and trainers — worn off the court — have rallied since the glaring American-in-Paris looks of the '80s.

Inspired by a spread in Vogue last year, Jesse Garza, co-founder of Visual Therapy, the multicity styling service, lined up a look for a chic, on-the-go client consisting of a white T-shirt, a Jil Sander safari jacket and rolled-up pants with — in a first for him — Nike athletic shoes.

Neutral-colored athletic shoes with a touch of neon or metallic "look cool and modernist, " Garza said.

For lifestyle shoes, sneakers with a concealed wedge heel are becoming trendy, said Jim Whitlow, owner of Deka high-end activewear stores in Atlanta and Chicago. "You're not going to run in them because they're wedges, but you can definitely go to the gym in them. They have a wedge built in to give some height."

On the more grounded side, Newton Running, a brand out of Boulder, Colo., is oriented to the natural-form running trend. Once your feet adjust to the shoes' lower-to-the-ground profile, you might crave them for errands too. (They're Whitlow's run-around preference.)

"They can take a person from gym to carpool to happy hour to airplane, " said Whitlow, formerly a competitive runner and a father of four, always on the go.

Newtons take some getting used to for a casual runner used to heel-striking. Newtons are oriented to encourage a midfoot landing, in line with the natural-form running trend. Rather than being elevated, my heel seems about level with the ball of my foot, which feels as if it has a roller under it to spring off of.