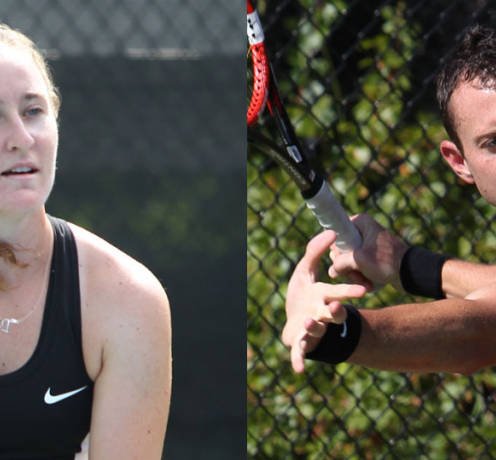 PRINCETON — Regionals are fast approaching this week, and the Tigers finished the regular season with a strong showing.

The boys’ team finished the regular season with a 9-2 overall record, and the girls finished with an 8-3 record. Coach French has been extremely proud of the progress her teams have been making over the years.

“I cannot brag enough about these teams, ” Coach French said. “I have watched them improve so much over the last four years. They work so well together and are a fun bunch to work with. They have excelled from the novice stage as a freshman to collegiate.”

French also mentioned that a key to some of her team’s development had been taking lessons from Mark Sarver, who is the head tennis coach at Bluefield College. The top four singles players from her boys and girls teams are seniors, and she likes to call them the “8 Musketeers.” Kelsi Browning is first in girls’ singles, and Adam Anderson is first for the boys on the team both are fourth in the region. Other notable singles player that will play in regionals are Savannah Farmer, Miranda Basconi, who finished undefeated, and Alex Browning.

For the boys doubles, Adam Anderson and Hunter Alford are second in the region. Savannah Farmer and Basconi are fourth in the region for girl’s doubles. Going into the postseason French is also confident in her team’s abilities to make a strong run.

“I know they can win, ” French said. “The scores don’t show how awesome they perform. My Musketeers have been the highlight of Princeton High school sports this year. The Magnificent 8 seniors have excelled all season, and we are looking forward to making a run at states.”

The players are also confident in their abilities as well and feel they are playing their best tennis at the right time. Kelsi Browning feels confident about regionals, and she is facing an opponent she beat during the regular season, but she knows the post season is completely different.

“I’m feeling confident about regionals, ” Browning said. “I have been preparing and I know my opponent wants to win just as much as I do.”

Anderson is also confident in his team’s ability and is proud of the leaps they have made.

“I feel like we have the best chance in four years to go out and make a run, ” Adam Anderson said. “Seven out of fourteen seeds on our team got a regional seeding last year it was only two.”