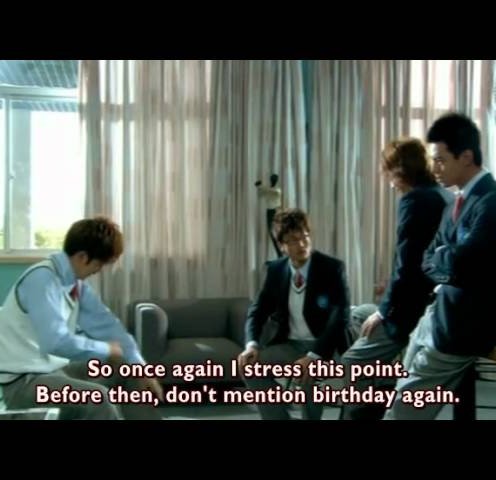 It was completely unexpected. The words, the rhythm, the song just came to mind as she was staring at a picture of a boy with a bandage over his eye. As if something had took hold of her body, the paper lined with blue and red was steadily filled in by the lead of a simple pencil. Word upon word, stanza upon stanza decorated the once-blank page as her fingers nimbly wielded the pencil in expertise. She wrote late into the night, ignoring the yawns spewing forth and the drooping of her eyelids.

It was only until the red numbers on her digital clock flashed "1:03" did she finally lay down her pencil and drift to sleep in her bed, eyes closing and darkness overcoming her in mere seconds.

Ryuzaki Sakuno awoke blearily to the buzzing of her alarm clock on her night table. Reaching over to slap the "off" button, Sakuno moaned drowsily and rubbed the sleep from her eyes. Unconsciously, she sought out her cute animal calendar hanging on the opposite side of her bed. One of the dates was circled in red marker, standing out against the whiteness of the rest of the page. It was only a moment later she realized what the circle represented.

Gasping, Sakuno checked the time (7:30am) and flew out of bed just as her grandmother – Ryuzaki Sumire – called from the first floor. In her panic, she didn't notice the paper on her desk fluttering to the floor as she dashed by.

"Sakuno! Your first day of third year isn't going to wait for you to get ready!"

Sighing, Sakuno made her way out of the tennis courts (her grandmother needed to be there, as coach and all) and towards the entrance of the school. "Mou, Tomo-chan's going to be so mad" she mumbled, bento box dangling from her clasped fingers. With the little time she had left to meet up with Osakada Tomoka, Sakuno could only make a couple onigiri (rice balls). Even then, she was still ten minutes past the meeting time. Tomoka was going to chew her out for ten minutes, knowing the loudmouth as well as she did.