Racquets for every player type and an innovative racquet selector highlight launch. January 10, 2015 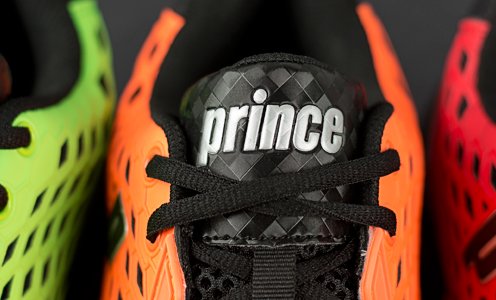 Prince, a leading manufacturer and distributor of performance racquet sports equipment, footwear and apparel, officially announced today the release of their Spring 2014 Racquet Collection including new models of their Premier, Tour and Warrior series of racquets initially introduced in Fall 2013 as well as a new line of LS series racquets.

The latest launch from Prince is highlighted by the introduction of Pro Series models in the Tour(Tour Pro 100 and Tour Pro 98) and Warrior (Warrior Pro 100) racquet franchises and is another piece of the brand’s 2014 product strategy centered on giving the consumer the right equipment for their game.

”Nowhere is it more evident that we are listening to our customers than in the introduction of these Pro Series racquets, ” said Tyler Herring, VP of Product Design and Development for Prince Global Sports. “The Pro Series are just great racquets; traditionally grommetted, high-quality frames that give players the classic feel that they demand.”

Complementing the launch of the Pro Series models will be updated versions of racquets that utilize EXO3 Technology for great all around performance and a 54% larger sweet spot. These new frames in the Tour Series include (Tour 100T, Tour 100 (16x18), Tour 100 (18x20), as well as updated racquets from Prince’s previous Rebel Series(Tour 98 and Tour 95). World Number One Doubles Team Bob & Mike Bryan, along with top ten ATP Singles PlayerDavid Ferrer, can all be seen playing in the Australian Open with the Tour Series racquet models. The Warrior Series includes the best selling model (Warrior 100) and will be played on tour by top ranked American John Isner.

Along with the additions to the Warrior and Tour Series, this Spring Prince will add two new models to the Premier Series (Premier115 ESP and Premier105L ESP), featuring Prince’s newest Extreme String Pattern (ESP) Technology delivering an aggressive string pattern that is designed to provide up to 30% more spin.

”With the introduction of all these racquets, it is essential that our consumers can easily identify the right racquet for their game, ” said Peg Connor, Director of Global Marketing for Prince Global Sports. “Our new racquet selector is a unique, interactive web app that makes the racquet selection process fun and easy. Tennis is a great sport and when you are playing with the right equipment it is even better.”

Through a series of six questions ranging from level of play to importance of power, players are given a number that directly corresponds with a unique power level number assigned to every Prince racquet. The power level number is then matched up to a racquet that would best meet the player’s needs. Prince’s new racquet selector is currently available through and at .