Rafael Nadal v Novak Djokovic It Is In The Monte Carlo April 16, 2015 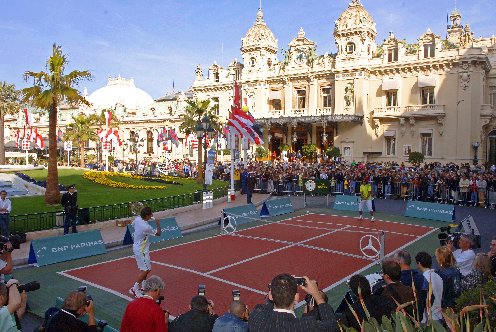 Rafael Nadal v Novak Djokovic It Is In The Monte Carlo SFs, Who’s The Pick?

And here we go! I’ll happily take a so-so day of tennis if it means we get our first Rafael Nadal-Novak Djokovic collision in 10 months Saturday. That’s how things went today in Monte Carlo with Tomas Berdych, Gael Monfils and Djokovic all cruising into the semis before Nadal needed three to oust David Ferrer.

First up was Berdych who advanced when Milos Raonic withdrew with a foot injury down 5-2. Switching surfaces can be tricky especially for big guys like Raonic, so hopefully it isn’t anything serious and he’ll be OK soon.

What an opportunity for a well-rested Berdych now.

“So far everything is going well, ” said Berdych who is into his third Monte Carlo SF. “My preparation is really good. I’ve done as much as I could, playing on the clay right after the Miami, which is a good sign for me. I’m able to execute it in the matches.”

Under new coach Dani Vallverdu, Berdych is having a very solid season with no real blemishes thus far – all his losses have been to top players. And he’ll be the favorite in his next match against Monfils who somehow blew out Grigor Dimitrov 6-1, 6-3. That after Dimitrov destroyed defending champion Stan Wawrinka a day earlier, so it was quite a puzzling result: Is Gael that good? Is Dimitrov that bad and if so had bad is Stan?

“Today, I wanted to make him run a lot, left [to] right, left [to] right [on] a lot of points, ” said Monfils. “I tried to dictate with my forehand, move him around the court, short [and] back. I was like trying to play very deep and very high and heavy to tell him: ‘Grigor, you need to stay back.’”

It was then Djokovic’s turn on center and he continued his winning ways easily disposing of US Open champion Marin Cilic 6-0, 6-3 to run his Masters streak to 19.

After winning Indian Wells and Miami, Novak’s looked awfully sharp this week, but let’s be honest, who has he played? Albert Ramos? Andreas Haider-Maurer and Cilic who is just returning to the tour? So the 2013 Monte Carlo champion should be winning easily in his second home.