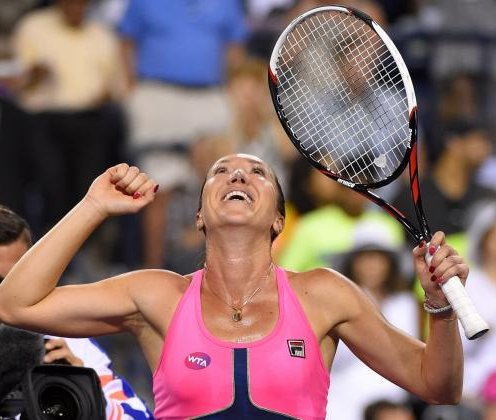 DOHA, Qatar - It was a bittersweet start to the week for Simona Halep. The good news, she's fresh off the equal-biggest WTA title of her career at the Dubai Duty Free Tennis Championships. The bad news, she had to pull out of her title defense at the Qatar Total Open due to a left rib injury.

"It happened before the tournament last week, on Saturday, during practice, " Halep commented. "I had a big pain in my rib and it was really tough to move my body. But then I had a few days off before I started the tournament - I wasn't 100%, but I just wanted to try to play, and it went well.

"But now I still feel it, and it's more than before, so that's why I decided to stop."

Halep was particularly disappointed at the timing of the injury - Doha was the site of her first Premier 5-level title last year, which she matched with the aforementioned title in Dubai last week.

"I'm very disappointed because it's a very important tournament for me, " Halep said. "Last year here I won my first big title. This tournament gave me a lot of confidence for the rest of the season.

"It's always tough when you have to withdraw because of pain. I just have to take care of my body and look forward to the next tournaments coming up. Yes it's a big injury, and it's the first time I have had this problem, but I'll take the positives from Dubai and I hope to be recovered from it soon."

And just how soon will the World No.3 be back in action on the match court? "Normally it's like 10 days to recover, and then I will be okay to play, " she said. "I hope to play Indian Wells 100%."

Looking even more into the future, Halep was asked by the press in Doha about her goals for 2015, and whether reaching World No.1 was on her radar. It turns out it kind of is, but kind of isn't.

"Of course it's one of my dreams, but I'm more focused on winning a Grand Slam and winning many titles, " the Romanian said. "And if Serena is still playing, I think it's tough to become No.1.

"If I play well, if I'm healthy, and if I win titles, yes, I can be very close to No.1. But I'm trying not to think about this too much because it gives me pressure, and I don't need pressure right now."