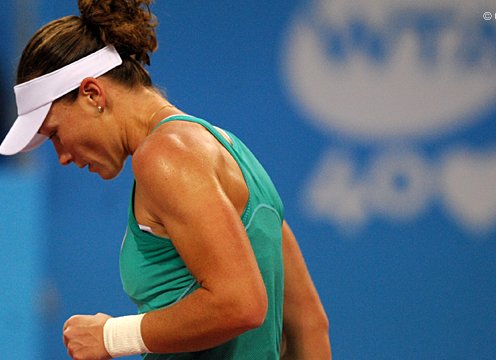 INDIAN WELLS, CA, USA - She seemed down and out time and time again in the match, but Simona Halep hung in there and just kept coming back, eventually battling past Jelena Jankovic in a thriller for the biggest WTA title of her career and the No.1 spot on the Road To Singapore leaderboard.

Things didn't look pretty for Halep early on - while Jankovic came out firing, holding serve handily and ripping her trademark down-the-lines to perfection, the Romanian seemed off, putting together a -10 differential of winners to unforced errors in the opening set (8 winners to 18 unforced errors).

Jankovic had all kinds of leads in the the second set, too, going up 3-1 and, after letting that break go, breaking again for 4-3 and 5-4, even serving for the match in that game. But Halep wouldn't let go of the match, squeaking out some very close games to take that marathon 63-minute second set, 7-5.

There was nothing routine about the third set either, as the players traded breaks three times back and forth, but again it was the No.3-seeded Halep who came through in crunch time, breaking the No.18-seeded Jankovic one last time in the final game of the match to finally close it out, 2-6, 7-5, 6-4.

The key for Halep might have been tightening the screws on her unforced errors - the two players had the same amount of winners in the second and third sets, but Halep had 17 fewer errors (29 to 46).

The World No.3 gave the former World No.1 some major props in her speech at the trophy ceremony.

"First of all I want to congratulate Jelena - you were amazing, " Halep said. "Well done for a great two weeks here. You did a great job, and it was an amazing final. I'm really happy I could win today.

"This is my biggest title and I will never forget it."

Before these two weeks, Halep's biggest WTA titles came at the Premier 5 level - Doha last year and Dubai earlier this year. And by capturing her first Premier Mandatory-level title in Indian Wells, Halep jumps past Maria Sharapova and Serena Williams to take the No.1 spot on the Road To Singapore leaderboard, the year-long journey to the BNP Paribas WTA Finals Singapore presented by SC Global.

Though she didn't come away with the title, these last two weeks have revived Jankovic's career. A series of injuries had seen her go from No.6 to No.21 over the last 12 months - but she came alive in Indian Wells, the site of her own biggest career title in 2010, and she'll now return to the Top 20.