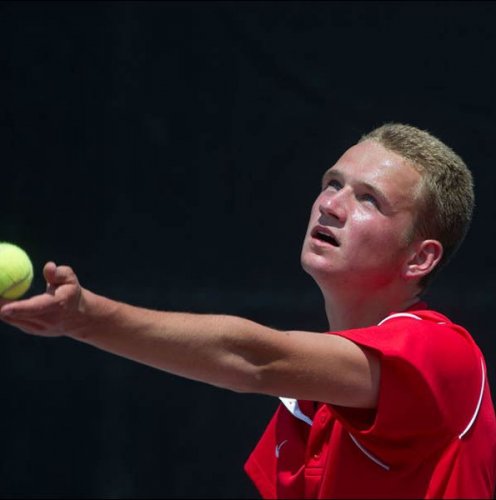 5/2 Team at CVC Tournament (thanks to Mr. Banning for taking this photo)
4/13 Team Picture in format

In his three victories, Barr disposed of his opponents in quick fashion, rendering no more than three games in any given match.

Solon and Kenston players didn't make very many friends during the 21-team Division I sectional tournament last week on the Comets' home courts, as they ran the show to claim six of the eight spots for districts.

A repeat of last year, the doubles bracket resulted in an all-Solon final, despite the Comets graduating David Shankman and Brian Yang – their No. 1 tandem in 2013.

On Saturday April 26th, the Kenston Bombers Boys Tennis team traveled to Lexington, Ohio to play in the Lexington Minuteman Invitational. The tournament was very strong with teams from all around Ohio. The Bombers played exceptionally well and tied for second place with Jackson High School, falling short to Walsh Jesuit by one point. However, the Bombers have a chance for revenge on Thursday, May 1st as they take on Walsh once again. The match will be played at home at 4:30; any support would be greatly appreciated. This coming weekend the Bombers are hosting the Chagrin Valley Conference Tournament which includes Hawken, Chagrin, Beachwood, Orange, and Kenston. The Bombers are looking for a CVC tournament win after finishing 3-1 in the duel matches.

4/27 Austin Barr won! Thanks for voting.