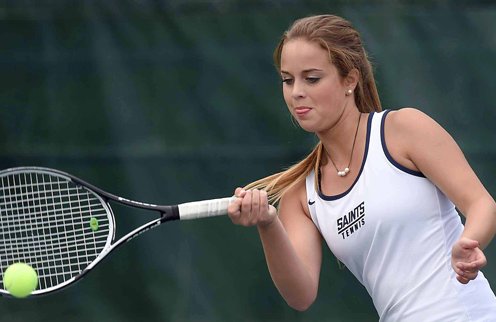 JACKSON — For the first time in her three years of playing tennis at the MHSAA Class 5A State Tournament, Natchez High School sophomore Kirdis Clark finally broke through the first round wall.

After losing in doubles in her first year, then in singles the next, she moved on to the second round of this year’s tournament in convincing fashion.

“She was more focused this year, ” assistant tennis coach Katrina McNeal said, “She just really wanted to make it out of the first round this year. She was poised and used her lateral movements very well, getting from line to line quickly.”

With this being Clark’s first time advancing past the first round, it serves as a milestone for her hard work and determination. Clark’s new-found success wasn’t just from her skills, though.

“She found her opponents weakness today, ” McNeal said. “(Her opponent) was having a hard time running up and catching the soft shots she was hitting.”

Clark will be playing again today at 1:30 p.m. against the No. 4 seed from Germantown.

She will be joined by first time state representative eighth-grader Danyel Weir, who will be playing mixed doubles with Vincent Bonds today at 11 a.m.