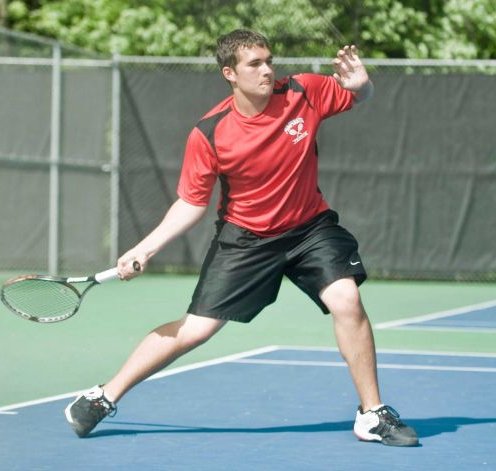 Glastonbury boys tennis coach Kim Francis is happy with the depth of her team this season.

Not only does she have her top four singles players returning from last year, she also has Derek Chapman back, who played his freshman year but did not play in high school the last two years so he could concentrate on USTA play.

Chapman, a senior who is ranked 20th in USTA in New England and is headed to Sacred Heart to play, is the No. 1 singles player for the Tomahawks, who are 5-0 after a 6-1 victory over Simsbury Monday.

"He wanted to try to make the [USTA] zonal team, and he did, " Francis said. "I got a call at the beginning of the season and he wanted to be part of the high school team.

"He played as No. 2 doubles as a freshman. He's earned his No. 1 singles spot. I make the kids challenge one another, and he beat everyone else."

Glastonbury has 10 seniors; eight play. Mark Dalton, the No. 2 singles player, is one of the captains, as are Zach Martino (No. 1 doubles) and Kyle Labrosse (No. 3 singles).

Jimmy Fitzgerald, another senior, plays No. 4 singles. Francis likes to tell her upcoming players his story: He was cut from the team freshman year. His sophomore year, he made the team but was one of the last players in the lineup. "Last year, he came back and played No. 4 singles and beat everybody, " Francis said. "He went from not being that good to being on the top court in practice. I keep saying to the kids, 'If you really work hard ...' He was determined. He has a high tennis IQ. He knows how to work the point. He forces you to make an error."

Xavier unbeaten: With No. 1 singles player Rich Ciamarra, the defending State Open and Class LL champion, leading the way, the Falcons are 7-0 with a tough match coming up on Friday.

Xavier will face Cheshire (5-0) Friday at Watrous Park in Cromwell. Both teams have matches before Friday, with Xavier playing Law and Hamden Tuesday and Wednesday and Cheshire facing Wilbur Cross on Wednesday.

The Falcons had two close matches to open the season with 4-3 wins over Branford and North Haven.

The singles players — Ciamarra, No. 2 Rob Borea, No. 3 Jack Curran and No. 4 Dylan Amble — are all undefeated.

@UNO Tennis: Congratulations to all of the winners of the Nebraska high school tennis tournament Fri, 22 May 2015 09:16 PM