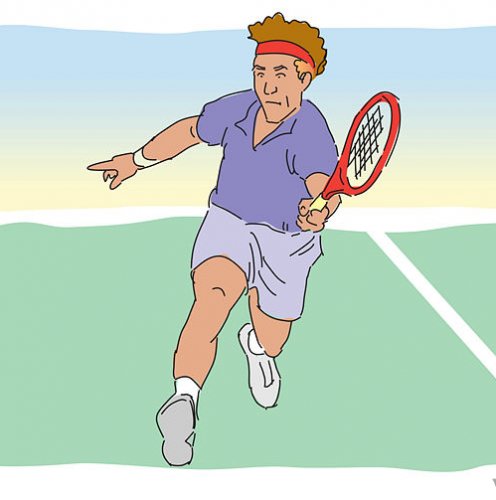 Sammi Hampton's love of tennis has driven her to become Washington's Class 4A defending champion in girls singles, a title the Skyview High sophomore will defend May 24-25 at the state tournament in Richland. "Basically, my whole life is tennis, " she says.Courtesy of Skyview High School

Sammi Hampton doesn't remember the tennis match, or the women playing on her television screen - but she remembers the outfits.

"I saw really cute outfits, so I told my dad I wanted to play that, " Hampton says.

Thus, a tennis champion was born.

Her father, Kirk Hampton, found 10-year-old Sammi a tennis racket and they started hitting. Six years later as a sophomore at Skyview High School in Vancouver, Hampton finds herself ranked No. 1 for girls under 18 in the Pacific Northwest section. Hampton is Washington's Class 4A defending champion in girls singles and will defend that title May 24-25 at the state tournament in Richland.

Hampton played all the usual youth sports growing up, but now they're a memory, as she focuses on tennis. It's a sport that will likely carry her into college, and she hopes, beyond into a career.

"I love tennis, " she says. "It's super fun. It's really energetic. I like being the single person out there, making decisions for myself."

And, of course, Hampton's outfits are as important as the tennis equipment.

"I made sure I had good outfits when I first started playing, and I still have to have cute outfits, " Hampton says.

It didn't take her long to become a name in youth tennis. Hampton says she won her first tournament within months after picking up a racket. Skyview coach Jay Gowen says he began hearing about this promising future Storm player when Hampton was in seventh grade.

"You hear that a lot, that you've got this great player coming to your school, " Gowen says. "A lot of times the kid will have talent, but what Sammi has is mental capability and toughness and all the intangibles."

Above all, Hampton loves to play. That was apparent two weeks ago when she won the Greater St. Helens League tournament singles title serving underhanded. Hampton has a minor elbow injury and could have skipped the tournament final and advanced in postseason play.

Instead, she chose to play. She not only won the final in straight sets, Hampton ended the match with an underhanded service ace.

"That was really cool, " she says.

"Basically, my whole life is tennis, " Hampton says. "I give up a lot with my friends. People ask me to hang out, but I can't. It's OK. I really like it, because I have a lot of friends I've made from tennis.

"It's so much fun. Even if I don't go anywhere in life with tennis, it's going to be great memories."

Gowen says Hampton is a well-rounded player with an arsenal of power and finesse strokes.

"She's the first player I've coached where I try to help, but she already knows it, " he says. "So, so smart."

In nearly two years of high school tennis, Hampton hasn't lost a match, and lost just one set in last year's state final to Stanwood's Megan LaLone. Hampton won the match, 2 sets to 1. Even though she has played in several prestigious youth tournaments and faced tougher foes, she says winning the 4A state title as a freshman was a dream that came true.