Inductees into Tennis Hall of Fame

Lindsay Davenport, 4 others inducted into Tennis Hall of Fame July 14, 2014 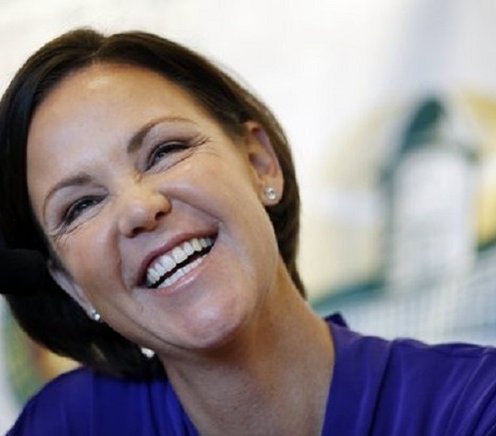 NEWPORT, R.I. - Lindsay Davenport remembers picking up a tennis racket as a child and the feeling that came with the ease of a powerful return. After giving up on two other sports, she found something she liked.

On Saturday, she reached her sport's highest honor, with her induction into the International Tennis Hall of Fame.

Chris Evert was among those at the ceremony. The tennis great described Davenport's game as "so loud, so strong and aggressive."

"Hitting the ball and making contact was always something that came very natural to me, " Davenport said during a news conference. "It was a blessing. It happened at a very young age. I didn't realize that it was that hard to do and I had a special talent, and it took a long time to put that altogether.

"That's what made it so fun to me, the sound and what I could do with the shots and see how hard I could hit them, " she added. "Everything else about the game took work and was a struggle, but that was something and that was the reason why I fell in love with it."

"An incredible talent well on her way to becoming an incredible ball striker, either man or women to ever hold a racket, " he said.

Davenport spoke of her passion for the game,

The 82-year old Bollettieri has coached 10 players to the No. 1 ranking, including Andre Agassi, Jim Courier, Monica Seles and Boris Becker. In 1978, he founded the Nick Bollettieri Tennis Academy, the first full-time tennis boarding school.

"I think the older you get, it's not the (age), but what you have here, " he said, touching his chest near his heart.

Vandierendonck was a top Dutch player before she was injured in a car accident in 1983. She's the first woman wheelchair player inducted.