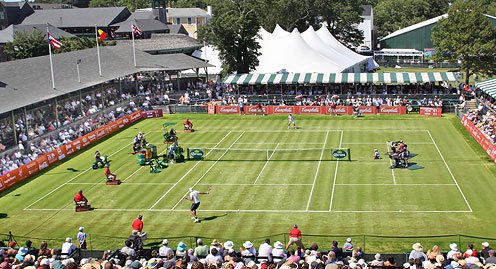 John Isner and Jack Sock, the No. 1 and 2 American tennis players on the ATP World Tour have committed to the player field for the Hall of Fame Tennis Championships. The tournament will be played at the International Tennis Hall of Fame in Newport, Rhode Island, July 11 - 19. The tournament, which is held directly after Wimbledon, is the only event played on grass courts in North or South America, and the only ATP World Tour event in New England.

"Newport is a great place to start my U.S. summer season. It's a great tournament. The fans, the venue, and the field always make for a good week, and I'm looking forward to coming back this summer, " commented Isner.

This will be Isner's seventh appearance in Newport, where he has been very successful previously. He won the tournament in 2011 and 2012, was a semifinalist in 2013 and was in the quarterfinals last year. Including his two Newport titles, Isner is a 9-time singles champion on the ATP World Tour, and he has also won 3 doubles titles. Isner is heading into the clay court season after a successful spring on the U.S. hard courts. Playing back-to-back Masters 1000 events in Indian Wells and Miami, Isner advanced to the fourth round in Indian Wells and the semifinals in Miami, before falling to world No. 1 Novak Djokovic both times. With fellow American Sam Querrey, he was also a semifinalist in doubles at Miami.

Jack Sock is currently ranked world No. 36 in singles, and is ranked within the world top-10 in doubles. He was a semifinalist in Newport last year, falling to eventual champion Lleyton Hewitt. Earlier this month, Sock won his first ATP World Tour title, with a victory at the U.S. Men's Clay Court Championship in Houston. Sock's doubles success is highlighted by the 2014 Wimbledon doubles title, which he won with Canadian Vasek Pospisil. This season, the duo partnered to win the BNP Paribas Open in Indian Wells, and they were finalists at the Miami Open, both of which are ATP World Tour Masters 1000 events.

"I can't think of a better way to start the U.S. summer swing of pro tennis than by welcoming the top two American players to our tournament, " commented Todd Martin. "John and Jack are both a lot of fun to watch compete, and I know the Newport fans will be glad to welcome them back once again. We're putting together a strong player field and looking forward to a great tournament."

Joining Isner and Sock in the player field will be Steve Johnson, another top American player who is currently ranked in the world top-50, and ATP World Tour veteran Tommy Haas of Germany, formerly ranked world Number 2. Additional players will be announced in the coming weeks.