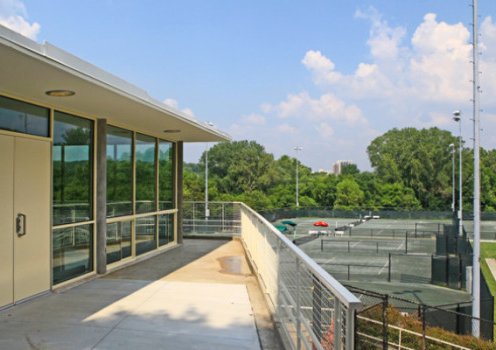 MARIETTA, Ga. (AP) - Lee Sessions Sr. grew up playing tennis in Marietta’s Lewis Park, and decades later, the Georgia Tennis Hall of Fame is relocating to his hometown and will be named after his family.

The Sessions Georgia Tennis Hall of Fame and Museum, which will feature artifacts from the sport’s history and tributes to tennis stars, will open on Marble Mill Road on May 2. The new museum location will be larger at 1, 300 square feet, compared to its current 300 square feet in Atlanta.

Sessions, who is a member of the Hall of Fame, said he’s honored for the tribute and proud to be a member of a historic Marietta family. Sessions Street in Marietta is named after the long line of Sessiones the 68-year-old tennis fan comes from.

“To me, to have the Hall of Fame named after the Sessionses - that’s super. It’s something that’s hard to even talk about because it’s so flattering, ” said Sessions, who now lives in Amelia Island, Florida.

His great-great-great grandfather, William Sessions, twice served as mayor of Marietta in 1885 and 1898.

Lee Sessions has a long history of fostering tennis in the state through his involvement with nearly every tennis association in Georgia.

Since the age of 5, Sessions has been playing tennis.

“I remember I wanted to look the part, so I asked my mom to buy me the white shorts and I had the all-white outfit and white shoes, ” Sessions said. “As a little boy you go play and the best thing is to go and get the outfit as dirty as you can. Then you get a brand new outfit.”

On the tennis court, Sessions said age and other differences between people weren’t boundaries.

“You could play with older people and all kinds of people you never would have met otherwise, ” he said.

After his sons, Lee Sessions Jr., 42, Kevin Sessions, 40, and Landon Sessions, 36, were born, the elder Lee Sessions began getting more involved in tennis as a coach and supporter of the sport. He said he coached all of his sons on the weekends and spent time training and practicing with them on the court as they grew.

Lee Sessions Jr. and Kevin Sessions both went on to excel at tennis at the University of Georgia and in international tournaments.

Meanwhile, their father stayed busy working with other tennis fans to start the nonprofit Georgia Tennis Foundation in Atlanta in 1986.

“It just grew from a germ of an idea all from people who were very involved in tennis to a big organization, ” Lee Sessions Sr. said.

Kevin Sessions now serves on the board of the Georgia Tennis Foundation and is co-chairing the opening of the new Hall of Fame.

“The mission of the Georgia Tennis Foundation is to really promote and grow the sport of tennis in Georgia, ” Kevin Sessions said.

The Hall of Fame is currently in the Bitsy Grant Tennis Center in Atlanta, and the new location will include a museum area with interactive kiosks and videos.

“The goal is to hopefully bring a state of awareness to the sport. Georgia has a rich history of tennis, ” Kevin Sessions said.

Hall of Fame Co-Chairwoman Kelly Baskin McGill, who is a girls tennis coach at Baskin McGill Tennis Academy, is also a board member of the Georgia Tennis Foundation.

“I was born and raised in Marietta, so I know that myself and a lot of the locals there would love to have a place where they can appreciate tennis, ” McGill said.

Justin Bieber sings 3am at GA Hall of Fame