Donate a racquet and get free ducats to Hall of Fame Tennis June 24, 2013 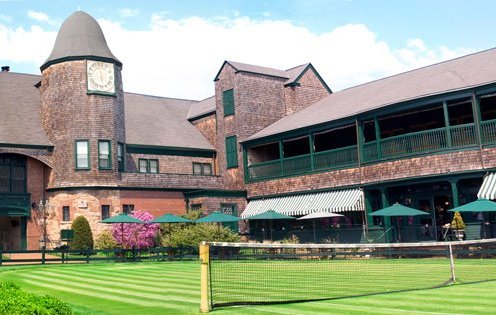 For each usable racquet donated prior to July 5, 2013, the International Tennis Hall of Fame will award two complimentary vouchers that may be redeemed at the box office during the tournament for seats in the South Stands for matches to be held on Monday, July 8 and Tuesday, July 9.

The Hall of Fame Tennis Championships, which will be played July 8 -14, is the only men’s professional tennis tournament in New England, and the only tournament played on grass courts in North or South America. Headlining the player field is two-time defending champion John Isner, currently ranked world No. 21, who will set out to become the first player to win the tournament three times in a row. Also scheduled to compete is No.1 American Sam Querrey, rising American stars Ryan Harrison and Jack Sock, and former world top-5 star James Blake. Former world No. 1 Lleyton Hewitt has committed to return to Newport this summer, following a successful run at last year’s event that brought him into the finals.

Complementing a full week of exciting ATP World Tour tennis, special events during the Hall of Fame Tennis Championships include junior tennis clinics, family activities, and more. A unique highlight of the tournament week is always the Hall of Fame Enshrinement Ceremony, when the highest honor in the sport of tennis is presented to great champions and leaders in the sport. The Class of 2013 will honor former world No. 1 Martina Hingis, tennis industry leaders Cliff Drysdale, Charlie Pasarell, and Ion Tiriac, and Australian tennis great Thelma Coyne Long.

Usable racquets may be dropped off at the Hall of Fame Tennis Championships Tournament Office, located at 11 Memorial Boulevard in Newport, daily between 9 a.m. and 5 p.m. Racquets may also be sent to the International Tennis Hall of Fame prior to July 5 to the mailing address: 194 Bellevue Avenue, Newport, R.I., 02840.