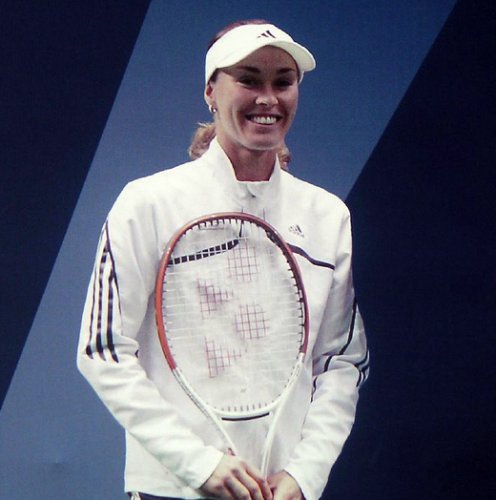 Monica Seles was born in Novi Sad, Yugoslavia in December 1973. Coached by her father from age six, she won her first tournament three years later even though she didn’t really understand the scoring system and had no idea if she was winning or losing.

In 1985, aged 11 years old, she won the Orange Bowl in Miami, Florida, and subsequently enrolled in the Nick Bollettieri Tennis Academy where she trained for the next two years.

Turning professional at 14 years old, she won her first title the following year in Houston, Texas, besting a young Chris Evert in the final. Just one month later, she reached the semifinals of the French Open but was beaten by Steffi Graf. At 15 years old, she was ranked #6 in the world of women’s tennis.

In 1990, Seles won through to the final of the French Open and again faced the-then world’s #1 tennis player, Graf. Although having four set points against her in the first set, Seles won the tiebreaker and beat Graf to win the title. At just 16 years old, she became the youngest winner ever.

The following year, Seles rose to be ranked #1 in the world, winning the Australian Open against Jana Novotna, and then successfully defending her French Open title in the final against Arantxa Sanchez Vicario. The season ended with Seles beating Martina Navratilov in the final of the U.S. Open.

In 1992, Seles again won the Australian Open, the French Open and the U.S. Open. However, Graf beat her in the final of the women’s singles at Wimbledon in straight sets.

Seles won an astonishing 22 titles and was in 33 finals of the 34 tournaments entered between January 1991 and February 1993, winning 159 of the 171 matches she played. Only Chris Evert has had a better winning record for her first four years on the professional circuit.

In January 1993, Seles successfully defended her Australian Open title for the third consecutive time, beating Graf in the final. But then tragedy struck…

During a match in Hamburg, Germany, a Graf-obsessed fan thought that by injuring Seles, Graf would become the world’s #1 tennis player again. Running out from the crowd, the fan stabbed Seles between her shoulder blades, and she was rushed off to hospital. Seles took the next two years away from competitive tennis, and meanwhile Graf did indeed become the world’s #1.

Seles returned to professional tennis in 1995, winning the Canadian Open beating Amanda Coetzer in the final. But she lost in a dramatic final for the U.S. Open to her old rival, Graf.

The following year, Seles won her fourth Australian Open, beating Anke Huber in the final, but this was to be her last Grand Slam win. Seles was clearly still affected by the stabbing and, despite hugely increased security at tennis matches in general, she never really found the form that propelled her to the top.

Andy Murray on his goal to win a tennis Grand Slam

Grand Slam Tennis Wii online match - How not to win a ...