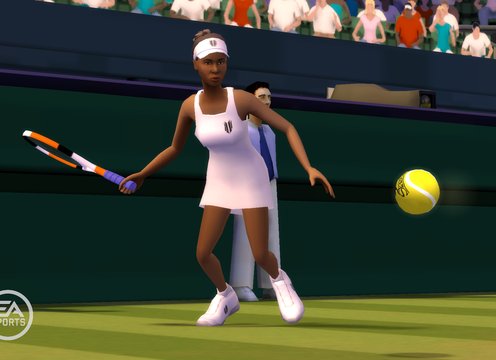 You can tell the difference immediately. You open up the invisible face of your ‘racquet’ to drive an imaginary forehand down the line, and that’s exactly where the on-screen ball goes. Put a bit more angle on the swing, aiming for the opposite corner, and the ball goes that way, too. Impressive!

After a couple of years of growing accustomed to the timing-based way of doing things, as seen in every single tennis game since Wii Sports, it’s quite remarkable. It took a while to lose the bad old habit of just flicking the remote nonchalantly from the wrist, but by the time we felt comfortable enough to really let rip, we probably had an 80% success rate putting the ball where we wanted it. Finally, the Wii remote works like we always wanted it to in a tennis game.

Of course this is all dependent on using the MotionPlus add-on, which is bundled with the premium version of Grand Slam Tennis. Without that insubstantial widget plugged into the bottom of the remote, it plays much like any other Wii tennis game, with the direction of the shots based entirely on how early or late you took a swing. You can switch between control methods on the fly, by plugging in combinations of MotionPlus and a Nunchuk during play. The game recognises what you’ve got and adjusts accordingly, with the appropriate degree of AI assistance.

The Nunchukless MotionPlus set-up is the most satisfying to use, but it means you have to pay close attention to the orientation of your player. If you swing a forehand when the ball is on the backhand side, your player will swipe at thin air and commentator Pat Cash will call you an arsewipe.

That won’t happen so much if you add a Nunchuk, as you’ll be able to run around the ball to hit it on your strongest side. Unfortunately you’ll also run the risk of whipping yourself in the face with the cord or pulling the plug out of the bottom of the remote if you swing too wildly, but at least the game won’t freeze and ask you to reconnect it when that happens.

After playing this in our somewhat cramped games room, we know why the MotionPlus comes pre-fitted into one of those nasty silicon safety jackets. You can take it out if you want, and we did, but if you’ve got a nice TV, light fittings or double glazing that you’d like to keep intact, we’d recommend using it. And the strap, too – make sure that’s double tight – Grand Slam Tennis makes Wii Sports Bowling look tame as far as furniture-threatening motions go.

The perfectly tuned controls go hand in hand with a physical solidity that gives the whole game an impressive sensation of weight. The way the ball bounces, the way the players slide when changing direction, the speed and angles you can get on your shots.

It reminds us of the brilliant Super Tennis on SNES, where we could zing cross-court balls like missiles over the net, swerving shots that landed just inside the tramlines. We can do the same sort of thing in Grand Slam Tennis, and that’s definitely a first on Wii as far as we’re concerned.