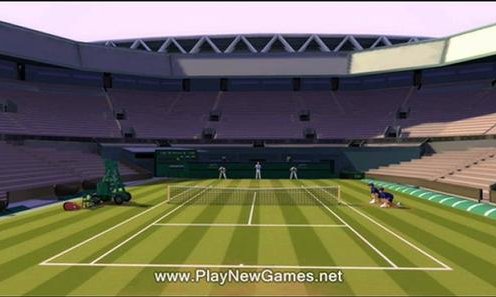 Grand Slam Tennis for the Nintendo Wii goes far beyond a glorified version of Wii Sports' tennis once you plug in the Wii MotionPlus.

Learning to control the newfound power takes some time, but the reward of an accurately placed shot will keep you coming back to the virtual court. So lace up your white sneaks, grab a Gatorade, and plug in the Wii MotionPlus for the most realistic living room tennis to date!

When Nintendo releases a new game-changing gadget, they generally do it alongside a first-party title; the Balance Board was bundled with Wii Fit and Animal Crossing was supported by Wii Speak right of the box. It's surprising, then, that Mario's handlers allowed Electronic Arts to roll out the red carpet for the precision control-pushing Wii MotionPlus with their untested take on tennis - one of the few sports the publisher's not already dominating with an annual release.

Turns out, Nintendo and EA knew exactly what they were doing, as Grand Slam Tennis is not only a fantastic new franchise, but a damn impressive showcase of Wii MotionPlus' promise and potential.

Before you invest in the accuracy-amping device, though, understand that Grand Slam stands on its own as a content-packed offering that'll satisfy seasoned tennis fans and first-timers alike.

It supports a robust career mode that'll see Wimbledon champ-wannabes facing current and classic players on an impressive variety of real-world courts, not to mention the ability to create and customize a character, local and lag-free (in my experience) online competitive options, and pick-up-and-play party modes.

Players are welcome to enjoy all this content without a Wii MotionPlus plugged in, and can expect an experience that'll be instantly accessible to anyone who's ever picked up a virtual racket in Wii Sports.