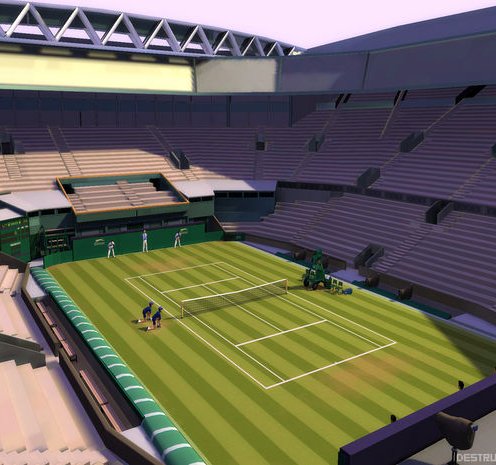 EA SPORTS™ welcomes a new member to its family of world class franchises. EA SPORTS Grand Slam® Tennis delivers the deepest and richest tennis experience ever developed for the Wii™ with authentic tennis motions on the most famous courts in the world. Professional tennis is all about the Grand Slams and EA’s new tennis franchise is no different. It is the only videogame where users can play at Wimbledon. In fact, it is home to all four Grand Slams; from the Australian Open to Roland Garros to the hallowed grounds of Wimbledon to the lively U.S. Open.

Perform real life tennis strokes in your living room and control every inch of the court. Users feel like they have a racket in their hands as they swing real forehands and backhands.

The 23-player line-up features some of the greatest and most accomplished in history including John McEnroe, who is exclusively featured. Joining the enigmatic Mac is an impressive roster of fellow champions who collectively own 135 Grand Slam singles titles, making this the most accomplished group of players ever assembled for a tennis videogame.

EA SPORTS Grand Slam Tennis is a genuine tennis experience that truly puts the racket in the palm of your hand!!

Key Features
• Swing the racket like a Grand Slam champion: From your living room, play tennis as it was meant to be played with the ability to hit a variety of shots such as top spin, slice, flat, lobs and drop shots.
• Grand Slam Career: Only a select group of pros have won the elusive Grand Slam and now for the first time, gamers can take up the same challenge. Conquer the various skill and legends challenges to accumulate more skills for your created player.
• Authenticity: Boasting realistic looking Grand Slam venues and playing styles true to the players in the game. Actual audio was recorded from the Grand Slams and used in the game.
• Tennis for Everyone: As simple or as complex as users want their gaming experience to be. Use the Wii remote to focus on ball placement or plug in the Nunchuk the control your player’s movement in addition to the shots.
• Wii MotionPlus™: One of the first games compatible with the new Wii MotionPlus, the experience is further enhanced with added shot depth and precise ball placement on the court. Racket rotation is also recognized so you can spin your stick just like the pros do!
• Social Tennis Party: An exciting tennis gaming environment comes to life with multiple players having fun and staying active. A dozen party games can be played, using seven core Tennis Academy style games.
• Connect Online*: Play singles and doubles against new opponents online. Every win contributes to your country on the nations leader board.
• Play Against or As Your Favorite Pro: The EA roster features 23 total players with a mix of men, women, legends and current stars. Players include Roger Federer, Rafael Nadal, Serena Williams, Pete Sampras, Boris Becker, Maria Sharapova and more.
• Practice Makes Perfect: Hone your skills on the practice courts at every venue. Take advantage of the instructional pop-ups to improve your abilities and beat the pros!
• Music: Original tracks composed by Paul van Dyk, a popular electronic dance music DJ and producer