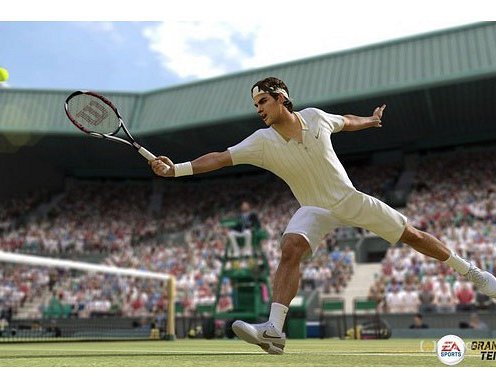 “We’re excited to bring the EA SPORTS Grand Slam Tennis franchise to the Xbox 360 and PlayStation 3 platforms where we can leverage the power of these high definition consoles and give it the level of authenticity and depth that EA SPORTS games are known for, ” said Dean Richards, General Manager, Team & Action Sports, EA SPORTS. “We feel like we’re bringing the first real innovation to the tennis category in a while with the Total Racquet Control system, and truly put the racket in the palm of your hands with really strong PlayStation Move integration.”

EA SPORTS Grand Slam Tennis 2 will include a host of gameplay features including:

PlayStation Move Support: The motion control experience gets you on your feet and puts a racquet right in the palm of your hands.

Legends of Now and Then: Play with or against more than 20 of the greatest players to ever grace the courts, including Roger Federer, Rafael Nadal, Novak Djokovic, Bjorn Borg, Maria Sharapova, Serena and Venus Williams.

Professional, Realistic, Organic (P.R.O.). AI: The playing styles and behaviors of the sport’s greatest stars are captured right down to their signature swings and emotional reactions. Realistic tactics and strategies are your keys to success against each legend whether playing on hard court, clay or grass.

ESPN Grand Slam Tournament Classics: Relive or rewrite some of the most memorable moments in tennis. From Borg versus McEnroe, to Nadal versus Federer, play your way through history unlocking up to 25 amazing moments of Grand Slam tournaments.

EA SPORTS Game Face: Use the Game Face Creator web application to make a lifelike 3D avatar as a playable character in the game.