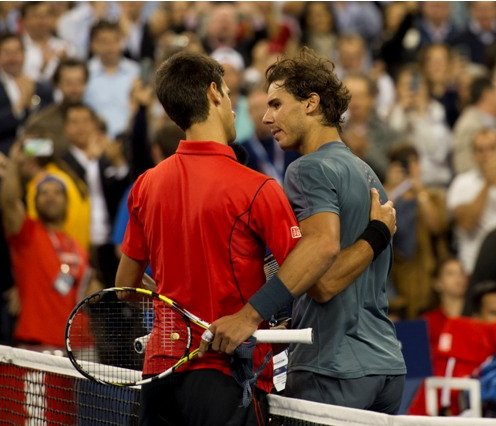 Watching a replay of the Wimbledon final last night on the Tennis Channel, the question inevitably comes up, Will Andy Murray ever win a Grand Slam?

Murray won over the hearts and minds of a lot fans Sunday with a strong(er) performance followed by an emotional post-match ceremony, but unfortunately a good start and a few tears won’t propel him over the top. Often in sports, just because you might deserve it doesn’t mean you get it.

After four misses in Major finals Murray deserves one and he’s the kind of player that I think should get one – If Thomas Johansson and Andy Roddick have Slams why shouldn’t Murray? Murray’s problem, though, is that he plays in a suped-up era with three of the all time greats who don’t seem to want to share the riches with anyone but themselves. How selfish of them!

The good news for Andy is there doesn’t appear to be any future Roger Federers, Rafael Nadals or Novak Djokovic’s on the horizon. Yeah, three is enough! Milos Raonic has a booming serve, monster forehand and an impressive tennis IQ, but a future double digit Slam winner? Doubtful.

Ryan Harrison, Bernard Tomic are going to be Top 10 type players, but they too don’t have that standout next level of game we see from our current Big Three. There is Juan Martin Del Potro and a few other players Murray will have to deal with, yet they too are beatable.

At 25 Murray’s also in the middle of that 24-26 peak window. Federer just won at almost 31 so I’d give Murray at least 4-5 years to win that maiden Slam. Plus, Murray’s game isn’t reliant on one big shot or one skillset. His versatility and his durability – apart from his whinging – should serve him well late into his 20s and early 30s. And he can continue to “learn” to become more offensive minded.

The bad news, however, is the 800 lb. gorilla: The presence of Djokovic, Nadal and Federer. If one of them opposes Murray in the final of a Slam I just don’t see how Murray’s going to win a first one against them anymore. And none of them seem to be going away anytime soon, not even Federer.

I remarked on Murray’s expansive game, yet against any of the Big Three – even though he did a lot right on Sunday – that game falls short. And mentally, in Slam finals Murray’s just not there. Not yet, at least.

Murray came out so well against Federer on Sunday, like he was shot out of a cannon. Eventually he came down to earth but he still hung on to win the first.

With the match in the balance in the pivotal second, Murray had an excellent chance at a passing shot on break point. I believe it was 15-40, 2-2 in the second when Federer duffed an approach shot giving Murray a sitter forehand pass for the break. Andy basically gagged, hitting what should have been a winning shot right back to Federer who eventually won the point with a smash.

Had Murray won that point, gone up a break in the second 3-2 maybe he rides that momentum taking the set and with it a 2-0 lead, and likely the title. It’s a big Maybe. But bottom line when the opportunity presented itself he flinched.

Murray had another chance early in the fourth to pull ahead 2-0 with a break, but again he just couldn’t covert the passing shot.