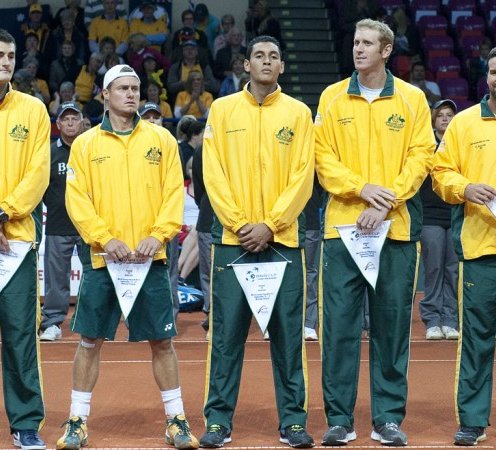 What's the absolute greatest in sports anyone can accomplish?

In team sports it's all about winning major titles together as a team: the Stanley Cup (hockey), the Super Bowl (football), or the Champions League (soccer) for example. In individual sports, it's about becoming #1 in the world (golf), setting world records (swimming & track/field) or winning major titles (Grand Slams in tennis).

Once the top athletes of a nation are called to represent their countries, a whole different story evolves. All of a sudden, victories are not achieved for themselves or the club team, athletes normally compete with every week: it's the collaboration with fellow countrymen instead. Face to face with other nations in special global events, such as World Cups or Olympic Games, an interesting dimension enters the definition of accomplishing something big:

"To play for my country, the deciding match - the fifth rubber (...), being down 2-1 and winning it in five - it's incredible." (Nedovyesov)

Tennis is one of those sports, where athletes generally travel around the world battling hard to win for themselves or together with their doubles partner. But from time to time the Davis Cup is calling, so are the team captains, and the nations' representatives gather to compete for 3 days in order to find out who is stronger. So happened last weekend (March 6-8) in 33 ties across the world.

33 ties were played between 66 nations.

While most of the media attention was naturally directed towards the First Round of the World Group, there was plenty of action in lower Groups as well:

36 tennis players with a past in college

Besides the usual suspects who are members of the top group of the ATP ranking (take a look at our previous articles, providing information on college athletes who competed in the Australian Open 2015: Singles & Doubles), there's a large number of other former college players, who have either no ranking in the ATP or who find themselves far outside of the top 100.

36 players with U.S. college experience equals 14% of all nominated team members for past weekend's matches. If we exclude the World Group with the likes of Isner (USA), Bryans (USA), Becker (GER), and Inglot (GBR), there are still 29 (!) participants in the Davis Cup Group I and II.