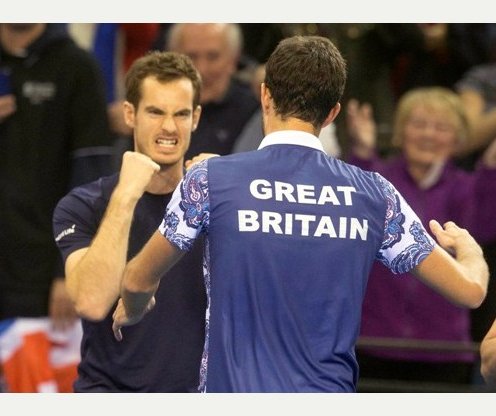 The Lawn Tennis Association must submit confirmation of the venue by 7 April and captain Leon Smith is considering whether to play the tie on grass or a hard court, which could see a return to Glasgow's Emirates Arena – scene of the first round win over United States.

Wimbledon has been ruled out due to logistical reasons and that leaves Queen's and Devonshire Park, which in June hosted the Aegon Championships and Aegon International respectively as traditional warm-up tournaments for The Championships at SW19, as the sole major grass court venues remaining.

A spokesman for Queen's Club told IBTimes UK: "The Queen's Club has not been approached over the possibility of hosting the Davis Cup quarter final, but would certainly be prepared to consider doing so should we get such an invitation."

Devonshire Park Lawn Tennis Club chairman Ken Pollock told IBTimes UK: "We would be delighted to be chosen as the venue if the decision is made to stage it [the Davis Cup tie] in Eastbourne."

Skipper Smith will likely deliberate with key members of his team, including 2013 Wimbledon champion Andy Murray, before making a decision over the venue. Murray labelled the atmosphere in Glasgow the best he had played in and a return is still possible.

The venues in London, Eastbourne and Glasgow appear the only three remaining options for the LTA to consider after a string of venues were ruled out following the victory over USA which saw GB into the last eight of the Davis Cup for a second straight year.

Davis Cup rules which state that a chosen venue must be available to practice on for the entire week prior to the tie taking place has ruled out Wimbledon, whose reserve day for the men's singles final is Monday 13 July. There are also concerns over the short turnaround for Centre Court which regresses significantly during the tournament fortnight.

There remains some uncertainty over the logistics of hosting the tie at Queen's Club, with officials said to not initially be keen on keeping the temporary stands in place for the Aegon Championships on 15-21 June for four weeks after the tournament.

London's O2 Arena, which has hosted the ATP World Tour Finals since 2009, and the SSE Hydro in Glasgow which staged gymnastics and boxing during the 2014 Commonwealth Games, are unavailable as they both play host to American singer Bette Midler.