Victories for Andy Murray and James Ward over USA in Davis Cup March 6, 2015 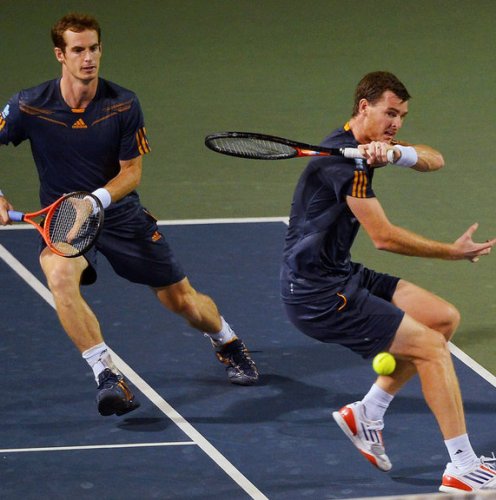 Andy Murray has carried British tennis in the Davis Cup for years, a statement so obvious it barely needs repeating – but it was James Ward, the eternal second fiddle to the Scot’s Yehudi Menuhin, who took the lead and the glory to give Great Britain a 2-0 advantage over the United States on Friday.

In his second outstanding fightback in consecutive cup ties against the Americans, Ward, ranked 111 in the world, soaked up 39 aces over four hours and 56 minutes to beat the 20th-ranked John Isner 6-7 (4-7), 5-7, 6-3, 7-6 (7-3), 15-13. Last year he did this to Sam Querrey on day one to put Great Britain on the road to the quarter-finals. Now they are two-fifths of the way there again in this 20th Davis Cup tie against the Americans.

Ward has a day to rest before a possible tie-settling finale against Young on Sunday, and said, “It was just under five hours of high-level tennis. Neither of us wanted to give in. I’m just happy I got over the line. Even if you get break points, match points against John, he’s still going to come up with a big serve.”

When told Murray was near tears courtside afterwards, Ward said, “To have Andy living every point with you is something I haven’t experienced before. He’s probably my best friend in tennis. We did a lot of training in Miami. He knows how hard I’ve worked.”

For his part Murray later tweeted: “Time to remove every item of clothing and run through the streets of Glasgow.. Absolute farce from @JamesWardtennis”

Playing in front of his home crowd for the first time since he won Wimbledon two years ago, Murray earlier delivered on the expectations of the nation by beating Donald Young 6-1, 6-1, 4-6, 6-2. It was quick and, in the main, largely untroubled – in stark contrast to the battle that followed.

After three hours and 41 minutes of unalloyed intensity, Isner, one of the game’s great fighters, did a remarkable thing: he stopped dead in his tracks as Ward’s cross-court winner gave him his first match point. We should have known that would not be the end of it.

The American, his long legs clearly aching, held with his 37th ace. Forty minutes later, Ward got another match point in the 20th game of the set, his lob went an inch long … and Isner survived. There was a minor cessation of hostilities when, after holding for 11-10, Ward sprinted to the locker room for a toilet break.