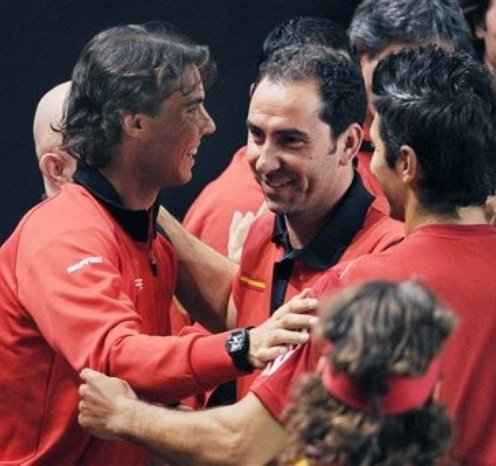 So it will be grass for Great Britain’s Davis Cup quarter-final against France: the grass of Queen’s Club in west London, which is usually the preserve of its well-heeled members through the long summer days of July, August and September.

This intriguing match should, fitness permitting, bring the top British pair of Andy Murray and James Ward up against quality opposition from the likes of Jo-Wilfried Tsonga and Richard Gasquet. It will also add an extra flourish to tennis’s new, grass-friendly calendar. With players now receiving an extra week to prepare for Wimbledon, we are finally seeing the “lawn” return to lawn tennis.

“It wasn’t long ago that three of the slams were played on grass, ” Murray pointed out recently. “I think it’s great they’ve given it an extra week, but I think they should also get a Masters event on grass. That’s the case on all the other surfaces. For me, the more weeks on grass, the better: more time to get used to the conditions.”

It was not always guaranteed that the Queen’s Club members would agree to leaving the 7, 000-seat Centre Court standing for another month after the Aegon Championships, which are on June 15-21 this year. They have never previously shown much enthusiasm for proposals to add an extra week of international competition – this time involving the women – to their summer schedule.

However, the Davis Cup still has a unique resonance, especially in an era when Leon Smith’s Great Britain team have shown themselves to be serious contenders. After the drama of the tie against the United States in Glasgow last month, which produced cliffhanging matches on the opening two days, tickets are likely to vanish at high speed when they go on sale at 7am on May 27.

“Our British team have all had very good results as individuals at Queen’s Club, in particular Andy Murray having won the event on three occasions, ” Smith, the team captain, said. “The grass courts at Queen’s are some of the best in the world and our team will look to use the passionate home crowd to full advantage.”

Murray and company can indeed expect to receive intense support, although this was not the case the last time Queen’s Club hosted a Davis Cup tie. That was in 1990, and also involved French opposition, although the balance of power was much less even. A team comprising Jeremy Bates, Nick Brown and Andrew Castle were blown away 5-0 by the high-class pairing of Henri Leconte and Guy Forget.

“Anything foreign was glamorous in those days, ” Castle recalled on Tuesday, “and a lot of the Queen’s members – and even some people at the Lawn Tennis Association – seemed more enthusiastic about the international stars on their doorstep than about the British team.

“I played doubles with Batesy [Jeremy Bates] – I think it was my last home appearance in the Davis Cup – and when I served towards the Baron’s Court end I tried to look to the right so that I saw the ordinary British tennis fans, rather than looking to the left and seeing all those dignitaries. It didn’t make any difference: they were just too good and it was over in a flash.