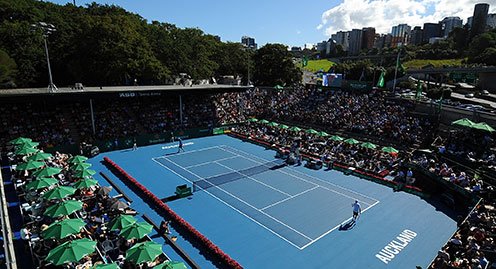 Second seed Djokovic added to his 2008 and 2012 title runs with a 6-3, 6-4 victory over top seed Rafael Nadal, who finished runner-up for the second time, in the fifth No. 1 versus No. 2 final in the 44-year history of the prestigious season-ending championship.

Djokovic extended his winning streak to 22 matches with victory in one hour and 37 minutes at The O2 in London. He improved to a 41-21 record in title matches and to 7-2 this year.

"This can serve as a great platform for 2014 season. I'm extra motivated and inspired to work and get myself, first of all, rested and recovered in the off season, and then work on my game and get ready for Australian Open."

Djokovic pierced Nadal’s defences early on in his third season-ending final. The depth of his groundstrokes ensured Nadal played well behind the baseline on the medium-paced indoor court. Two backhand errors cost Nadal as he was broken to 15 in the second game.

At 0-3, Nadal was battling to keep the set competitive. But when he struck a vicious forehand that kicked up to Djokovic’s backhand at 15/15 in the fourth game, the momentum of the match shifted. Djokovic’s first serve went off the boil and Nadal was able to play closer to the baseline, effectively giving Djokovic less time and space, to gain his first service break.

But a double fault at 3-4, 30/30, put him back in trouble with Djokovic smothering the net to break serve. He served out the set to 30, finishing with an ace out wide. Nadal had won just 45 per cent of his second service points in the 44-minute opener.