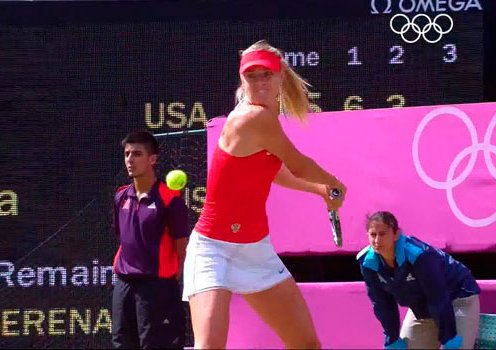 In Olympic tennis, the winners of the semifinals advance to the gold-medal round, where the runner-up will earn silver, and the other two semifinalists play for the bronze.

Serena's win completes a career Golden Slam in singles, as she has won all four of the majors. Azarenka's bronze was the first Olympic medal ever won by Belarus.

In women's doubles, Serena and Venus Williams (USA) defeated Andrea Hlavackova and Lucie Hradecka (Czech Republic) 6-4, 6-4 to win the gold medal, and Maria Kirilenko and Nadia Petrova (Russia) defeated Liezel Huber and Lisa Raymond (USA) 4-6, 6-4, 6-1 to win the bronze. The Williams sisters now own a record four Olympic gold tennis medals each, three in doubles together (2000 Sydney, 2008 Beijing, 2012 London) and one each in singles, as Venus won the gold in 2000.

In men's singles, Andy Murray (Great Britain) defeated Roger Federer (Switzerland) 6-2, 6-1, 6-4 to win the gold medal, and Juan Martin Del Potro (Argentina) defeated Novak Djokovic (Serbia) to win the bronze. Murray's gold medal was the biggest accomplishment of his career thus far and the most important title captured by a British player since Fred Perry won the US Championships in 1936.

Del Potro's bronze was the first medal won by Argentina in the 2012 Olympics.

In men's doubles, Mike and Bob Bryan (USA) defeated Michael Llodra and Jo-Wilfried Tsonga (France) 6-4, 7-6(2) to win the gold medal, and Richard Gasquet and Julien Benneteau (France) defeated David Ferrer and Feliciano Lopez (Spain) 7-6(4), 6-2 to win the bronze. The Bryan brothers' win completes a career Golden Slam in doubles, as they have won all four of the majors.

London 2012: Tennis at the Olympics explained (Part one)