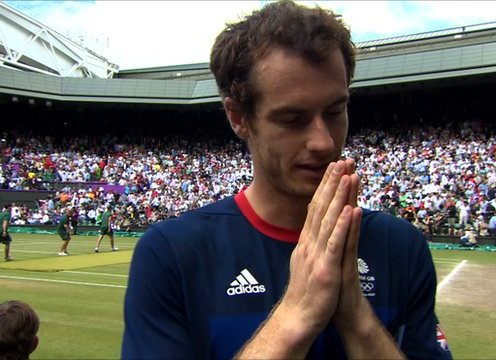 LONDON - With an emotional crowd cheering him on, Britain's Andy Murray won the gold medal in men's tennis at the London Olympics on Sunday, easily defeating Roger Federer.

The chants of "Andy! Andy! Andy" rang out during the third set at the All England Club as Murray inched toward the gold-medal finish line.

For Murray, it was the biggest victory of his career, coming about a month after his most-devastating moment, a crushing loss to Federer in the Wimbledon final.

This time, the adulation was supportive, not suffocating. Murray defeated Federer in overwhelming fashion, beating the seven-time Wimbledon champion, 6-2, 6-1, 6-4, in a match just shy of two hours.

He never lost his serve. Or his nerve.

The victory set off waves of emotion in a place starving for a tennis champion. Murray is the first British man to win singles gold at the Olympics since 1908.

"I didn't expect this at the start of the week, " he said in his BBC interview. "I was a little bit tired after Wimbledon, but I felt so fresh on the court today. I didn't feel nervous at all ... I've had a lot of tough losses in my career and this was the best way to come back from the Wimbledon final."

Federer, who survived an epic in the semifinals, thought he might have been emotionally drained from a week of grueling matches. In fact, he pulled out of the upcoming tournament in Toronto after his semifinal win.

"I think this is as good as I could do during these championships, " Federer said. "Andy was much better than I was today in many aspects of the game.

"For me, it's been a great month. I won Wimbledon, became world No. 1 again, and I got silver. Don't feel too bad for me. I am very, very proud honestly to have won a silver. Had a very emotional tournament from start to finish. I could have lost in the first round against (Alejandro) Falla. Same thing obviously with (Juan Martin) Del Potro. I felt like I won my silver, I didn't lose it. So I feel very, very happy"