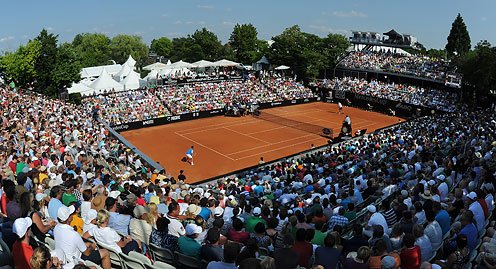 BERLIN - Chinese Li Na recovered from a miserable start to topple world number one Serena Williams of the United States 0-6, 6-1 and 6-4 in the second round of the Stuttgart Grand Prix on Wednesday.

Li Na from China reacts after defeating Serena Williams from the USA during their 2nd round match at the Porsche Grand Prix tennis tournament in Stuttgart, Germany, Wednesday, Oct. 1, 2008. [Agencies]

Williams, playing her first match at the indoor tournament after a first-round bye, took advantage of a series of errors from her unseeded opponent to take the first set in just 21 minutes.

From the the second set on, Li suddenly found her range, hitting the lines more and more often and putting Williams under increasing pressure.

Williams, who won her ninth grand slam title at the U.S. Open last month, made 11 unforced errors in the second, dropping her serve twice along the way.

Li broke for 4-3 in the decider after Williams saved three match-points in her next service game, and she clinched the victory with an ace down the middle.

Li was joined in the quarter-finals by Victoria Azarenka of Belarus, who upset eighth-seeded Pole Agnieszka Radwanska 6-1 and 7-5.