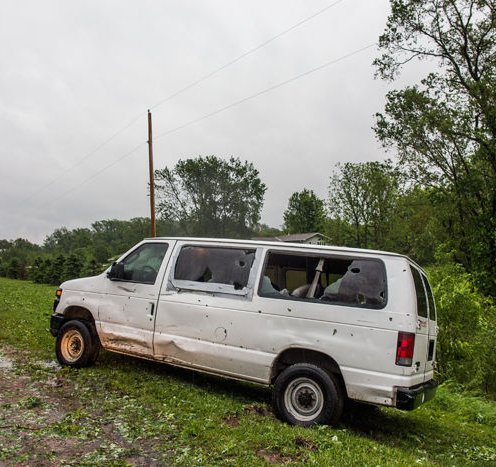 In most climates, fall and spring are windy seasons. Where I live, it's not uncommon to be playing tennis in a 20 m.p.h. wind with gusts to 30 m.p.h. or more. A lot of the locals simply refuse to play in these conditions, opting instead for the indoor courts, but I'd rather be out in the crisp air, composing myself between points by absorbing a bit of the change in seasons. I'll take a windy day outdoors over any day indoors.

If we made one list of what you can do better in the wind and another of what you can't do as well, the first list might actually contain more items; the second, however, would feature one huge item: you just can't hit the ball as cleanly. This is why people hate to play in the wind. Your contact with the ball becomes much less predictable, so you can't hit as hard or as accurately. It can even hurt. When the ball blows around, you're much more likely to hit off center, subjecting the racquet to twisting and turning forces that are transferred to your arm.

Some players have more trouble hitting cleanly in the wind than others. Short, compact, relatively flat strokes are the least affected. A short stroke reduces the interval between the beginning of the stroke and the point of contact, so the ball has less time, during the swing, to be blown away from the expected point of contact. Hitting flat means hitting straight into the path of the ball, instead of trying to brush up or down on the ball with a swing that runs largely perpendicular to the line of the ball's flight. When two objects (in this case racquet and ball) are headed straight toward each other, the certainty of contact is much greater than if one is moving on a path that will only cross the other's, vertically, within a window of a few fractions of a second. This is true in calm conditions, but magnified in a headwind or tailwind, because that small timing window becomes much harder to find when the speed of the ball's flight is less predictable.

So, should you try to hit flatter, with shorter stokes, in the wind? Not necessarily. If you're constantly mishitting, yes. But, if you want to make the wind work to your advantage, then you'll want to use your spins. Let's look at how to take advantage of the wind as it comes from each of the four main directions in relation to you: in your face, at your back, from your right, and from your left.

@Robert Hartmann: Healthy breakfast then off to the courts for my new love, tennis. It's amazing how quickly it comes back after 15 years away #Exercise Mon, 25 May 2015 12:42 PM