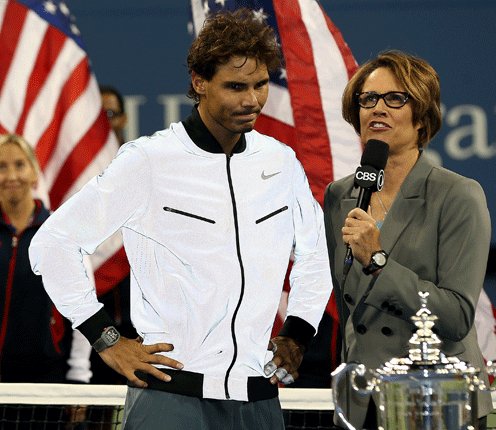 You have to consult the history of scoring for this one. Wikipedia provides both the "clock" theory and the idea that the origins of tennis scoring came from another game in which the numbers had physical significance:

"The origins of the 15, 30, and 40 scores are believed to be medieval French. It is possible that a clock face was used on court, with a quarter move of the hand to indicate a score of 15, 30, and 45. When the hand moved to 60, the game was over. However, in order to ensure that the game could not be won by a one-point difference in players' scores, the idea of "deuce" was introduced. To make the score stay within the "60" ticks on the clock face, the 45 was changed to 40. Therefore, if both players have 40, the first player to score receives ten and that moves the clock to 50. If the player scores a second time before the opponent is able to score, they are awarded another ten and the clock moves to 60. The 60 signifies the end of the game. However, if a player fails to score twice in a row, then the clock would move back to 40 to establish another "deuce".

Another theory is that the scoring nomenclature came from the French game jeu de paume (a precursor to tennis which used the hand instead of a racquet). Jeu de paume was very popular before the French revolution, with more than 1, 000 courts in Paris alone. The traditional court was 90 ft in total with 45 ft on each side. When the server scored, he moved forward 15 ft. If he scored again, he would move another 15 ft. If he scored a third time, he could only move 10 ft closer."

One other theory suggests the origins in ancient numerology:

"In medieval times, the number 60 was considered auspicious or “complete” in a similar manner to which the number 100 is considered to be a “complete” figure now. The medieval adaptation of tennis thus considered 60 to be the “game” with steps of four points like 15, 30, 45 (or 40 as it is today) and finally 60."