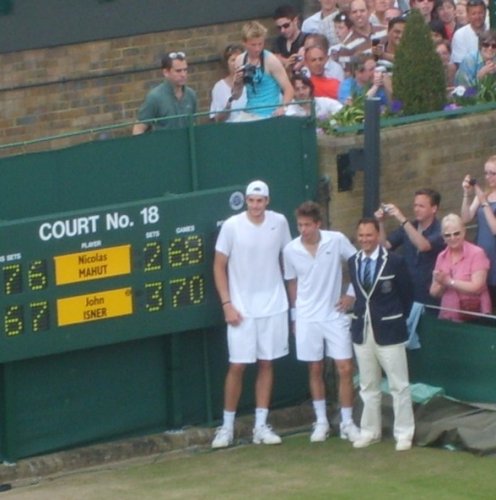 WIMBLEDON, England - When John Isner finally won the longest match in tennis history, he collapsed on the Wimbledon grass and then summoned one last burst of energy, springing to his feet and applauding along with the crowd.

The American hit a backhand up the line Thursday to win the last of the match's 980 points, and he beat Nicolas Mahut in the fifth set, 70-68.

"When you come out and play a match like this, in an atmosphere like this, you don't feel tired really out there, " Isner said, "even though that's exactly what we both were."

Isner finished with 112 aces, and Mahut had 103, with both totals eclipsing the sport's previous high of 78.

"It stinks someone had to lose, " Isner said. "But to be able to share this day with him was an absolute honor. I wish him nothing but the best, and maybe I'll see him somewhere down the road, and it won't go 70-68."

Missing the end of the marathon was Queen Elizabeth II, who had already departed the All England Club following her first visit to Wimbledon since 1977. She watched Briton Andy Murray win his match on Centre Court.

Isner won a match that was by far the longest in the sport's history in terms of games or time. The fifth set alone took 8 hours, 11 minutes, surpassing the previous longest match, which took 6 hours, 33 minutes at the 2004 French Open.

"We played the greatest match ever in the greatest place to play tennis, " Mahut said. "John deserved to win. He just served unbelievable."

The crowd roared when the players walked on the court Thursday. Mahut wore an intense expression, while Isner smiled and waved. The electronic scoreboard was again working after it froze and then went blank as the fifth set approached 100 games Wednesday.

When the match resumed and Isner held after reaching deuce, the chair umpire announced the score.

Both players continued to dominate with their serves. Mahut, always trailing when he served, held at love five times, and appeared to be the fresher player.