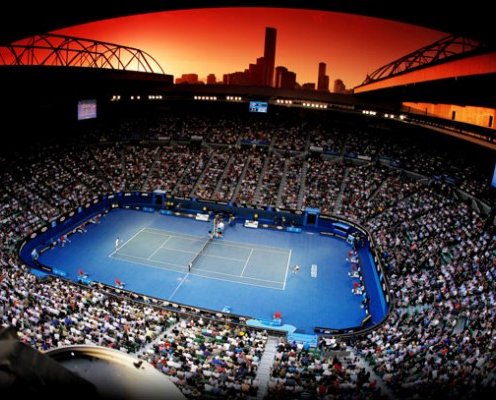 The second set, also decided by a tiebreak, went Djokovic's way, and while until that point there was little to separate the two players, neither of whom was playing their best tennis, things started to unravel for Murray in the third set as two nuisances wreaked havoc on his game.

With the score at one set apiece, Murray needed attention for blisters on his right foot, but despite the treatment, his discomfort was clear to see. Grimacing on every move he could not execute his shots with the power and precision he had demonstrated in earlier games and his focus was starting to wobble.

Murray said his foot wasn't a factor in his defeat: "It's a bit sore when you're running around, it's not like pulling a calf muscle it hurts when you run. It's not something that stops you from playing. There are certain things that just hurt when you run and hit the ball but it doesn't stop you from playing. I very rarely get blisters but 90 per cent of players will have played with one or problem."

The blisters, combined with an overexcited fan making himself heard at the most inappropriate of moments – namely when Murray was serving – saw the world No 3's game unravel and Djokovic was waiting to pounce. In the 32nd game, the Serbian, not phased by the apparent heckling, broke service for the first time in the match to take a 4-3 lead before closing out the set.

Murray's complaints were met with sympathy by chair umpire John Blom but despite him explaining that “just asking them to be quiet isn't enough” nothing more was done to address the problem besides a polite reminder. In fairness to the fan in question, the problem did not arise again. Unfortunately the same could not be said for Murray's injury woes.

His body was giving up on him, not only was he struggling with blisters but as the fourth set started he was gesturing to his team that there was a problem with his left hamstring and his movement appeared limited.

At two sets to one down against the defending champion, Murray had to come out fighting and while he held his opening game of service in the fourth set, he was unable to do so again as the King of Rod Laver played out to secure his crown, his fourth in Melbourne and sixth of his career.

After being presented with the trophy by one of only two other men to have won three titles in Melbourne – Andre Agassi – Djokovic said: “I would like to congratulate Andy, we've played so many great matches over the years and I hope for many to come.

“What a joy, it's an incredible feeling winning this trophy once more, it's my favourite grand slam my most successful grand slam, I love this court.”

Popcorn Tennis: How Will Fed Do? - Australian Open 2013