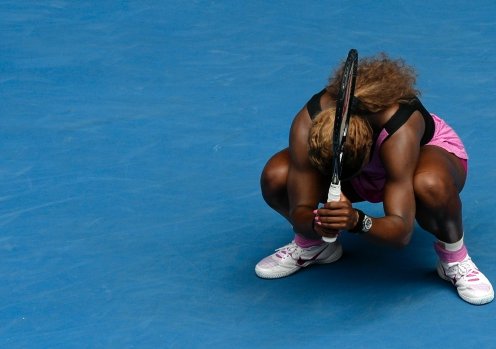 When Novak Djokovic gets to the final of the Australian Open, he wins it. When he takes the first set against Andy Murray, he wins it. Both of those familiar scenarios played out in the 2015 edition of the season’s first major, and, in a sad denouement, there was little the Scot could do to stop a player who could remain No1 in the world for the rest of the year, perhaps longer.

Djokovic won his fifth title on the Rod Laver Arena on Sunday night, embarrassing Murray at the end of a match that was always enthralling, mostly terrific but occasionally awful over three hours and 39 minutes.

The Serb owns Melbourne and, for now, he owns Murray, who moves from No6 to No4 in the rankings but would have slotted in at No3 had he won.

Djokovic won 7-6, 6-7, 6-3, 6-0, but, of the 24 matches and five grand slam deciders they have now played against each other over nearly nine years (Djokovic leads 16-8 overall, 3-2 in slam finals), few can have featured as much simultaneous gold and dross as this final, idiocy following excellence like a lost puppy.

Murray blew more important points than Djokovic, especially in the third set, and at the end, he was beating himself up as much as the Serb was.

The Scot was spent and disappointed that the sometimes brilliant tennis he had rediscovered over the past fortnight deserted him at precisely the wrong time. Yet, as is increasingly the case as he comes to terms with the vagaries of his sport, Murray found the right words to put it in context.

“Success is being happy, ” he said. “It’s not about winning every single tournament you play, because that isn’t possible. You want to win every event, that’s for sure. That’s what you prepare for. But no one in the history of this game has ever done that. You prepare as best as you can. I would rather lose in the final and be happy than win the final and go home and be miserable. So I try to enjoy my tennis more right now than I probably did at the beginning of my career – and everything that goes into it.

“Obviously I would have liked to have won today, but you can’t win all of them, unfortunately. I’m happy with everything that I put into the event. I couldn’t have done anything more to give myself a better chance to win. So I can’t be disappointed with that because I gave my best effort. That’s all I think you can ask of any athlete: to give themselves the best chance of winning. And I did that. I just wish I could have done a little bit better in the third set.”

In some ways, they were statistically close. Djokovic took nine of 16 break opportunities, Murray five of 12; the winner hit eight aces, the loser 10; Djokovic had fewer unforced errors, 40, than Murray, but only by nine. And when the total points were tallied, he had outscored the Scot by 136-118. But this was a match where the numbers were almost secondary to the narrative unfolding before us.