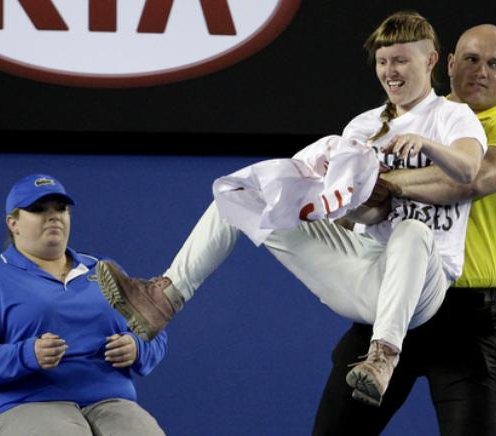 Of all the takeaways from this year’s Australian Open, this is arguably the most significant as the world No.1 cemented his place in tennis history with an Open-era record fifth Australian Open crown on Sunday night.

Throughout the fortnight at Melbourne Park, Djokovic failed to convince. He never played with the sustained consistency and intensity for which he is famed. He scratched his way to victories against Fernando Verdasco and Gilles Muller in rounds three and four. He overcame listless play and swathes of errors in the semifinals to see off defending champion Stan Wawrinka.

There were times he gasped for air. Times he appeared to be struggling with physical ailments. He frequently fired exasperated or desperate looks at his entourage throughout the latter rounds of the tournament. He was bothered by a nasty grazed thumb after a fall in the final against Andy Murray.

Yet when it counted, he was impenetrable.

In the semis, Wawrinka simply couldn’t stay with the streaking Serb, falling to a 6-0 defeat in the fifth set. Ditto Murray, who after winning the second set and breaking serve to move ahead 2-0 in the third, lost 12 of the next 13 games – and the last nine straight – and wilted while the top seed recovered from a physically shaky patch of play and began to relax and swing freely.

Winning final sets to love against some of your toughest rivals in the two biggest matches of the tournament? It’s extraordinary.

“I can’t say how proud I am. That (result) is going to serve definitely only as a great deal of inspiration for the rest of my career, ” he said.

“In these particular matches and circumstances, mental strength probably plays the most important role. In winning those matches, you need to be able to find that inner strength, mental, physical, emotional, especially when you’re down in the finals and when you’re playing a top rival.

“There’s a lot of things that can influence your state of mind. Of course, it’s not always possible to be 100 per cent concentrated for three-and-a-half hours. But it’s important to keep going because you fall many times, but mental strength allows you to keep going.”