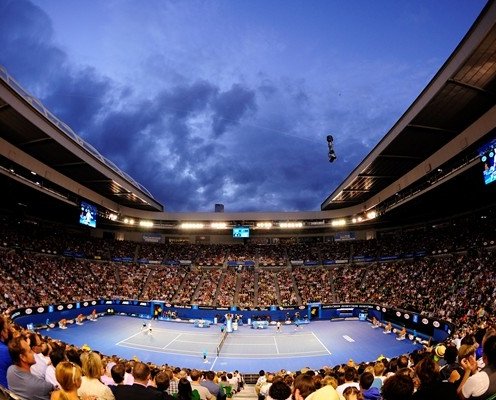 MELBOURNE, Australia - If the first week of the Australian Open is any indication, the most fashionable show-off shot on the ATP World Tour right now is the forward-facing, between-the-legs shot. It's not usually a shot often seen in matches, but it's been dominant in the shots of the week Down Under. See who hit it best, along with a couple of other memorable strokes.

He might have unceremoniously exited in the third round thanks to Andreas Seppi, but when it comes to spectacular shot-making, the old master is still showing the others how it's done. The undisputed king of the traditional tweener shows he can also handle this variation, which requires less technique but more athletic reflexes. Not only does Federer pull it off, but he hits a forehand winner on the line to finish off the point. It had to be seen on Hawk-Eye to be believed.

No one hits the shot like Gael Monfils, so he wasn't about to leave the tournament before reminding everyone it's still his trademark. In this point, he shows off his legs - not only by getting the ball back between them, but by running across the court to retrieve the next shot as well.

Young Aussie Nick Kyrgios grew up idolizing Federer, and he emulates him again here with a shot combination similar to Federer's effort during the tournament.

It's not just the shot, it's when he hit it. Seppi says he wasn't expecting to even reach the ball, let alone send the ball by Federer at net for a clean winner up the line on match point.

The big-serving Spaniard hits plenty of aces, but catches an extra, painful-looking target here. But to the ball boy's credit, he resumed his duties in a few minutes and got a personal apology from Lopez the next day, as well as a T-shirt and a wristband from the match. "Was very funny because he became very famous at school, " said Lopez. "Luckily, he is perfect and he is fine."