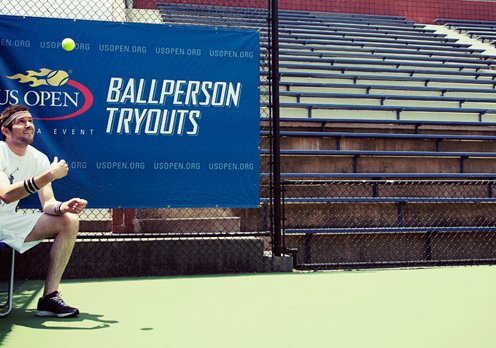 This summer 200 were returnees from previous years – including the occasional lawyer and a few other adults. But most of the open positions are filled by eager young girls and boys who come with only their pimples and pigtails and dreams of chasing balls on some of the world's most famous asphalt. Most are from the New York area. But a few, like Patryk, travel great distances to compete in what turns out to be a tough winnowing process in its own right.

On a humid day in June at the Billie Jean King National Tennis Center, the candidates get their first chance to chase, retrieve, and throw tennis balls. It doesn't sound too complicated, right? It's not – if you have the stealth of a ninja, the speed of a cheetah, and the heat tolerance of a cactus.

At this point, the candidates can be separated into two main groups: those who are mostly star-struck and those who are athletes. Judy Norton, 24, is unapologetic about not having trained for the audition. When asked about why she's doing it, she's very clear: "I really want to meet Serena and Venus, " she says of the Williams sisters. "Hopefully, I'll try out and maybe do a match for them. Everybody can dream."

The tryout is run like a well-oiled machine. Cathie Delaney, assistant director of US Open ball people, relies on her veterans to do most of the screening in the first round. The candidates are vying for two positions – "net, " where they retrieve the balls hit into the webbing, and "back, " where they scurry after the ones that go wide or fly past the baseline.

The net is considered the glamorous position. It requires speed, coordination, fast thinking, and, preferably, a small build. In the tryout, kids are positioned at both ends of the net poles. A ball is fired into the webbing. Instantly, the participants need to determine who will get the ball, take off like a Trident missile, grab the bouncing object, and decide whether to go back or continue to the other side of the court – all without stopping.