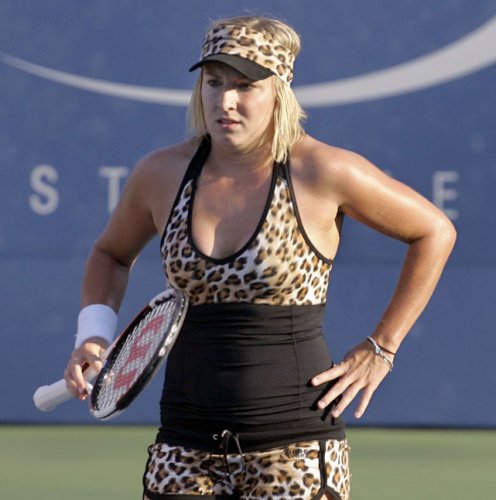 When the US Open tennis tournament begins today in New York, most eyes will be glued to marquee players like Roger Federer, Serena Williams, and Novak Djokovic. But as aces and forehands rocket across the net at Arthur Ashe Stadium, executives at Ralph Lauren will be focused on the court's periphery, where some ball boys will be wearing new, technology-enhanced shirts to monitor their biometric data.

As the New York Times reports, this year's US Open marks the debut of Ralph Lauren's new Polo Tech shirt — a black, nylon tee equipped with sensors to track the vital signs of every ball boy. Created as part of a venture with OMsignal, the shirt looks unassuming at first glance: black, tight, and splashed with the company's classic polo insignia. But woven into the fabric is a conductive silver-coated thread and an array of sensors that monitor the ball boy's breathing, heart rate, and stress levels, among other indicators. These data are collected in a "black box" attached to the shirt and can be monitored on a smartphone app. This black box appears to be the same bluetooth-based module that OMsignal announced earlier this year. The big difference is that this one has a yellow pony next to it.

In a press release published today, Ralph Lauren said the shirts will be worn by ball boys at select matches during the two-week tournament, and by Marcos Giron, a top-ranked collegiate tennis player making his Grand Slam debut at this year's Open. The company also plans to expand its line of "smart" apparel over the coming months, though prices have yet to be announced. The aim is to effectively merge high fashion with high-tech functionality — a balance that other designers have struggled to find. At the very least, the shirts should provide a muted backdrop for this year's more bombastic on-court styles.

US Open Ball Boy Eats It

US Open: The Road to Ball Boy Success | Mashable